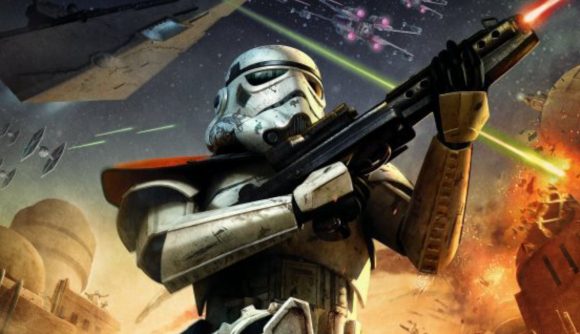 Years ago, word of Star Wars: Battlefront 3 – a sequel to the LucasArts series of the early 2000s – leaked out of TimeSplitters studio Free Radical. Today, a SteamDB listing revealed the existence of Battlefront 3 in the Steam’s back-end, suggesting that EA was bringing back the never-released title for modern players. The only problem is that the listing was completely fake.

The listing for ‘STAR WARS™ Battlefront III (Classic. 2019)’ showed up in a selection of unknown Steam EULAs scraped by SteamDB developer Pavel Djundik. The document itself referenced a ‘Haze Studios’, but no such game developer appears to exist. Free Radical – also referenced in the EULA – did, however, develop a game called Haze. (Korn tells me it’s ‘the shit’.)

It was just enough to get fans to put on their detective hats, but they did so with one important caveat – anybody can upload things to Steam under any title. And yeah, sure enough, that’s what happened here. SteamDB added a staff comment saying “this is fake and not official”, and shortly after, the application listing was updated to the title ‘Unity App Student Project’. With, er, a picture of Joe Biden as cover art.

Previously, the cover appeared to have been lifted from 2009’s portable Battlefront: Elite Squadron, adding to the almost-but-not-quite reality of the whole thing.

SteamDB (not affiliated with Valve) updated with staff comment saying: "This is fake and not official." pic.twitter.com/yWWMmy8RP6

Reports have suggested that Battlefront 3 was nearly complete when it was cancelled, though the work to go from ‘nearly finished’ to ‘finished’ – especially when we’re talking about a game over a decade old – would’ve been substantial.

As the current Star Wars license-holder, EA is bringing its games to Steam. But even EA’s own take on Battlefront 3 is likely a long time away, so don’t expect the ranks of Star Wars games on the platform to include Free Radical’s work anytime soon.