A Celebration Edition of Star Wars: Battlefront II is on the way. Following a leak of the title earlier this week, EA has now confirmed that the new edition of the action-shooter game, packed with new content, will release tomorrow.

According to a press release, the Star Wars Battlefront II: Celebration Edition “allows fans to enjoy the most complete version of the game yet, including all previously released and future content updates, with every era of the Star Wars galaxy represented.” Plus, kicking off December 17, content tying into the upcoming Star Wars: The Rise of Skywalker will come to the game.

The Celebration Edition will feature, in addition to the base game over 25 Hero appearances, including six ‘Legendary’ appearances, as well as an appearance of Star Wars movie characters Rey, Finn, and Sith Kylo Ren respectively. It’ll also have over 125 Trooper and Reinforcement appearances, more than 100 Hero and Trooper emotes and voice lines, as well as victory poses (over 70).

You’ll be able to buy the Star Wars Battlefront II: Celebration Edition on its own as a digital purchase, or at a lower price as an upgrade if you’ve already got the game. 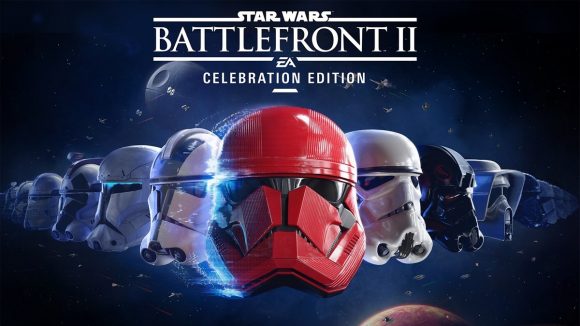 When does the star Wars battlefront ii: Celebration edition release?

EA has confirmed that the Battlefront II: Celebration Edition arrives December 5 – so you’ll be able to grab it tomorrow.