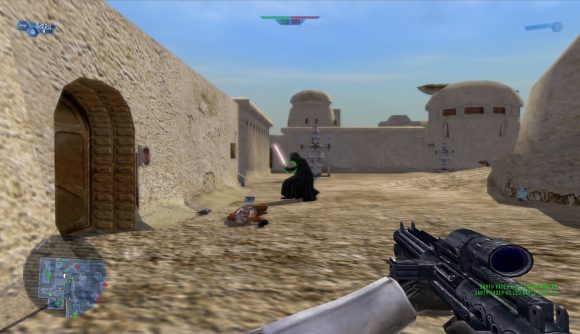 Steam is holding its annual May the Fourth Star Wars sale right now, and careful shoppers may notice a bit of a surprise when they browse the offerings. Under ‘Classics with Online Multiplayer,’ you’ll find the original Star Wars Battlefront, which had been missing from the game for quite a few years. That’s changed, thanks to a recent update, and now you can jump in and battle it up with the Battlefront that started it all.

Battlefront first launched on PC way back in 2004, and supported matches between up to 64 players. However, unless you had a lot of LAN cable and space in for 63 additional PCs, you had to use the now-defunct GameSpy service for matchmaking. When GameSpy shut down in 2014, Battlefront – and a host of other online games from the era – simply didn’t have any native systems to replace it, and the online scene was effectively shuttered.

The update comes at a bit of a turning point for the franchise. DICE has announced that it is winding down updates for the new Star Wars Battlefront II, and the Battle for Scarif update will be the last one as the studio moves into full production on Battlefield 6.

So there’s no time like the present to remember what Star Wars felt like 16 years ago – with the sale discount and the re-enabled online multiplayer, you’re bound to find plenty of blaster-packed battles to fight your way through this weekend.