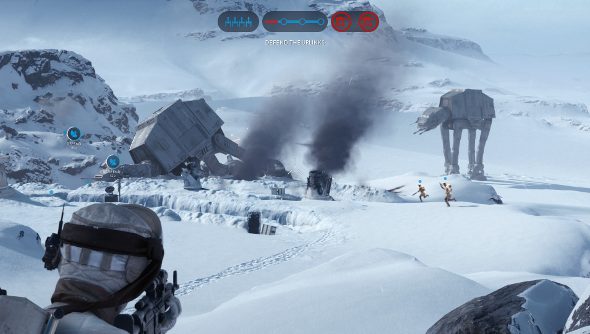 Star Wars Battlefront’s launch has been quite successful, compared to other Star Wars game launches. In the UK, it was the biggest Star Wars game launch, ever, according to Chart-Track, though this is only based on physical sales, not digital downloads, so it doesn’t really tell us much about how it’s doing on PC.

For that, we can look at swbstats.com. These aren’t official numbers from EA, so should be taken with a pinch of salt, but the numbers aren’t looking great. There are less people playing Star Wars Battlefront than Ark: Survival Evolved, an Early Access game.

According to swbstats.com, PS4 is the dominant platform, followed by Xbox One and then PC. The 24 hour peak figure is a surprisingly low 39,622 players, compared to Ark’s 41,660. If Battlefront was on Steam, this would still put it in the top 10 in terms of concurrent player count, however. But for a highly anticipated triple-A launch from a major FPS studio, it still seems a little low. Especially since the game is still so new.

As more players burn out or get everything there is to unlock, it’s likely that this number will only drop. So why hasn’t it made as much of a splash as EA and DICE likely hoped for? The PC port was pretty good, as we said in our Star Wars Battlefront PC port review, so it’s not the quality of the PC version.

Perhaps the issue is a problem with the price. Star Wars Battlefront’s standard edition is £49.99/$59.99, with a very pricey season pass. To keep playing the game, players are expected to shell out enough money to buy a whole new game, without knowing if these season pass maps or modes will be worth it.

Maybe the lack of a server browser is putting PC folk off, as well. Battlefront, despite having dedicated servers, won’t actually let you choose what servers you’re playing on, making it extremely difficult to create battles between your friends. It’s not what you expect on PC.

Still, what really matters is if getting into a match is easy, and it seems like it still is. Since launch, I’ve had no problems finding battles at any time of day, so it’s not all doom and gloom.

What about you lot? Did you pick Battlefront up on PC? Have you stuck around?