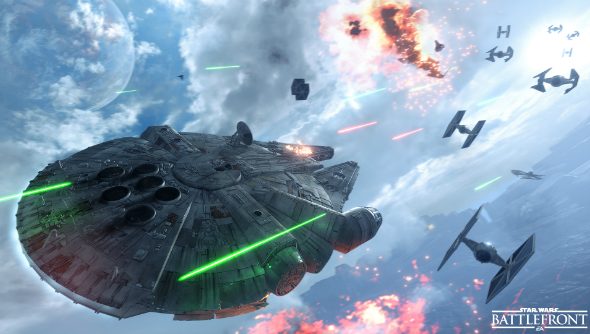 Next year we’ll get a new installment of Star Wars Battlefront, a joint effort between Dice and Motive. Jade Raymond announced the new game, in addition to a few more Star Wars titles, on stage during EA’s EA Play event preceeding E3.

The official press release mentions that a new installment of Star Wars Battlefront is currently in development at DICE, and that the team are working in collaboration with Jade Raymond’s Motive Studios in Montreal. Although they claim they’ve listened to all of the feedback they’ve recieved, they’re not getting into specifics right now, but part of the trailer shows a man in a PSVR headset flying an X-wing, so there’s definitely something there.

In 2018 we’ll see Visceral’s Star Wars action game, developed with Amy Hennig. Beyond that, Respawn Entertainment are making a 3rd person action adventure game that takes place ina timeline that hasn’t yet been explored in EA’s Star Wars titles. The trailer shows lightsaber combat, and the obvious dream would be Thrawn, but we’ll probably have to wait a while to see anything else on that.

Watch the video for more information on EA’s Star Wars stable, including a 5th birthday celebration for Star Wars: The Old Republic.