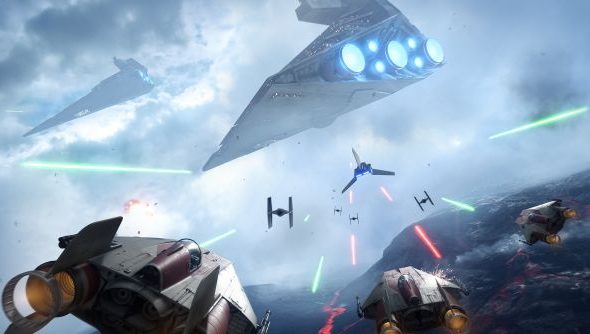 In a fantastic interview over on Gamespot, Peter Moore has dropped some bombs on a variety of topics, not least of which was the reasoning behind upcoming Star Wars shooter Battlefront’s lack of single-player campaign.

The question was two-part, with Moore first explaining that the big decisions like this are made so far out from release that it’s almost pot luck whether the scenario you planned for is still the case once the game hits launch day. His example compares the state of the MMO genre when The Old Republic began development – dominated by World of Warcraft and its ten million subscribers – and when it launched – still WoW-focused, but with lots of successful free to play titles too, and a focus on micro-transactions from the whole industry.

When pushed by interviewer (and scholar, if I do say so myself) Rob Crossley on AAA titles of this nature selling better when a single-player campaign comes as part of the deal, he had exactly this to say:

“So, there’s two phenomena with that statement. The first is that yes, you might be right. The second is that very few people actually play the single-player on these kinds of games. That’s what the data points to.”

An interesting statement and I’d be intrigued to see exactly how the data comes to that conclusion, and the source. EA could be running off a very different set of figures – Battlefield: Hardline and the like – versus, for example, Activision’s CoD-based numbers.

The full interview is well worth a read for further thoughts on Kojima’s situation with Konami, the hiring of Jade Raymond and some quite blunt question dodging on the topic of EA Access.