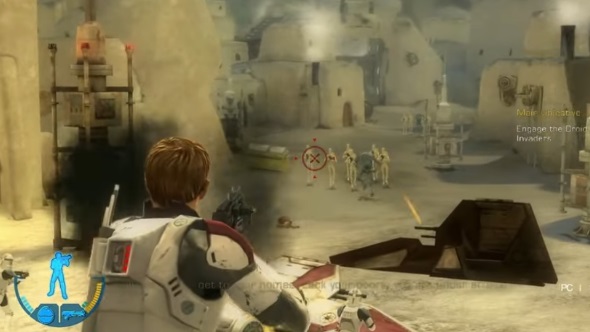 Over the past few months we’ve seen a gradual drip-feed of footage salvaged from the remains of Free Radical’s Star Wars Battlefront 3. The latest reveal from YouTuber FuZaH is a video of the game’s first campaign mission, which depicts a sequence set during the prequel films Clone War period, and involves a lot of exploding spaceships, tanks, and droids.

Fancy playing something that saw the light of day? The best Star Wars games on PC are what you need.

The game, which was once in alpha over at the TimeSplitters development studio, was cancelled, and the eventual DICE Battlefront reboot used none of its ideas. That’s a shame, as a campaign would have been very welcome. Although we can probably agree that most fans would say that a prequel-inspired campaign doesn’t top their list of ‘must haves’ for a new Star Wars game.

The Battlefront 3 campaign was to see twin clones X1 and X2 embark on a mission to bolster the forces of the Galactic Republic. These two new videos show the player controlling one of the clones and using them to bring down Trade Federation enemies, including the use of giant anti-air laser cannons that use projectiles which must be guided through HUD markers to hit targets.

The second video sees some space-set combat, an area the DICE Battlefront sorely lacked. It also emphasises the variety that was to be present in Battlefront 3; the first mission sees X1 begin boots-on-the-ground, before going on to pilot troop transports, use emplaced weapons, and finally make it into outer-space.

We already know that DICE are making Battlefront 2, and that it’ll look less like Battlefield next time. But what ideas are here that you’d like to see in a new game? Let us know in a comment.