Star Wars Battlefront is one of the most anticipated titles of this year, even more so after the plethora of in-game footage revealed at this year’s E3. Now, EA and DICE have announced a closed alpha test for the game, which will be held on July 2nd to those lucky enough to have been invited.

The invites have already been sent out, so you should check your email!

“Available for Origin on PC only, the purpose of the Star Wars Battlefront Closed Alpha is to perform a number of technical tests that will help the team at DICE as they continue the development of the game.”

Head over to this website to see if you’re eligible – you should have received an email anyway – but more likely than not, you’ll be greeted with this soul-crushing screen after applying: 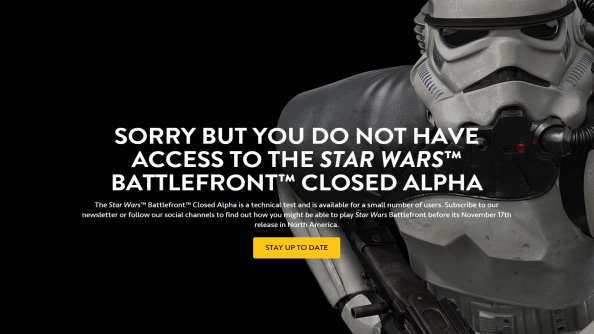 A EA response to a fan asking about the invite system confirmed that all the invites have already been sent out, and that there will likely be no more before the test begins. “Our team has sent out all invites at this time,” said EA in a tweet. “Make sure to check your Origin registered e-mail to see if you received an invite.”

According to VG247, here’s the closed alpha system requirements:

May the force be with you all as you frantically check your emails. If you were unsuccessful like me, then you have my permission to proceed and do this: