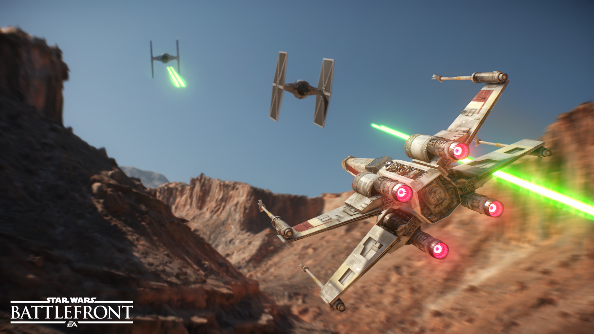 There seems to be a popular opinion out there on the internet that EA and DICE’s new Star Wars Battlefront game is simply a re-skin of the Battlefield games. It’s an opinion that’s got Jesper Nielsen, an assistant producer on the game, a bit upset. He took to Reddit to explain his grievances.

“I simply don’t get the Battlefield re-skin comment,” he said.

“From what we’ve shown, in what way does it look like Battlefield? Are you seeing tanks, lots of destruction, etc? This will not feel like or play like Battlefield. That’s never been our intention.”

“I can absolutely guarantee you that it feels nothing like Battlefield. That would be like saying Halo or COD feels like Battlefield. Or the original Battlefront games,” he said in reply to a poster sharing concerns.

“To some extent, all shooters are similar,” he said. “Heck, to some extent, all games are similar. To my mom, all games are probably more or less the same, right? So it always depends on the person looking at it. I’m pretty sure a hardcore Counter-Strike player would say the differences between Counter-Strike and Battlefield or Halo or Call of Duty are like day and night. It’s always about the lens you use, how far you zoom in. To some people, the details matter less–to others they matter more.”

The concerns are understandable following the launch of Battlefield Hardline earlier this year, which for all it’s attempts at innovation still ultimately felt like a traditional military Battlefield game with a cops and robbers mask on. However, so far we’ve not actually seen any footage of Battlefront in action, so I think it’s far too early to be making such accusations.