My goodness, what a racket. Perhaps the defining racket in videogames – a sound design symphony to match John Williams’ much less discordant one. Hark at the angry chord of a thermal detonator; the dull, plastic thud of blaster fire as heard from the inside of an energy shield; the wounded scream of a TIE overhead; the seagull call of their lasers, and the unrelenting squelch of the A-Wing’s guns in return. And then the score kicks in, like Holst if he’d ever visited the planets he wrote about. Is this the best sounding game ever made?

If it is, it’s an easy win – DICE have had the pick of 30-odd years of cinematic noise, and know just which frequencies send the ears of a certain generation vibrating with nostalgia. But the fact is, Battlefront earns the familiar cacophony it wears like a cape. This is an exemplary wish fulfilment shooter.

Do you think Battlefront will be remembered as one of the best PC games of 2015? Take a look at the competition.

The first thing that strikes you when you play the beta – after the initial hail of welcoming blaster fire, anyway – is that Battlefront plays exactly as you hope it will. This in stark contrast to Battlefield 4, in which you’re unlikely to see anybody exploiting squad features to the full or hanging on the orders of a commander in a given server. 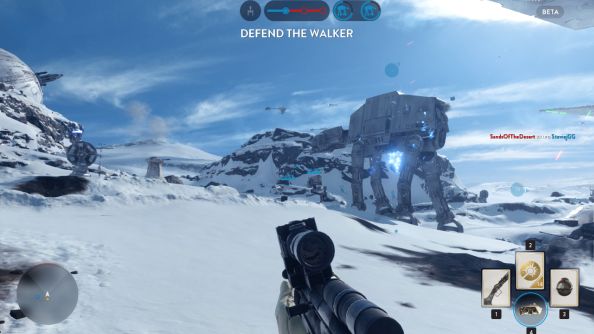 Rather than provide structure its players won’t have the patience for, Battlefront embraces the chaos that’s always been a part of Star Wars spectacle. There’s no order to the infantry-only Drop Zone mode, in which two teams scamper after objectives plummeting from the sky toward unpredictable locations. Battle lines are redrawn again and again as each escape pod is captured – before yet another falls from the heavens.

The body count is high. Typically, the nearest few troopers will home in on a newly landed pod to activate and defend it – while others start to pick them off from the hills with crude, long range cycler rifles, like Tusken sand-people. Slurping, viscous pools cause damage and discourage players from crouching in craters for cover, and while it’s possible to pick discrete paths among the outcrops to dodge rifle fire and regenerate lost health, the message is clear: in this movie, you’re an extra. The best you can hope for is a memorable death, with your ragdoll splayed across the scenery.

In the beta, Drop Zone takes place on the surface of Sullust, a planet unexplored before Battlefront, where players scramble over blackened crags with a distinct Icelandic lean. White mineral deposits mark the point where rock meet cool, turquoise water, and industrial pipes carry Yoda-knows-what across the steaming wastes. It’s distractingly beautiful. So much so that you don’t see the Imperial soldier who jets over your head and begins blasting you to bits. 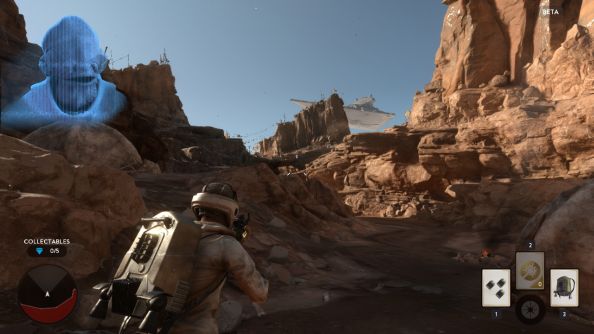 Jump packs are an example of a Star Card – special equipment unlocked by rank, and then bought with the credits you accrue over the course of a match. Which cards you have in your hand determines what abilities are attached to your number keys; play them right, and you can be disassembling droids with ion grenades and bounding across the landscape in short, powerful leaps. Cards need charges to function, which you can either buy with credits or find on the map as translucent lightning bolts.

All abilities are tied to cooldowns. That’s quite important, since it means you’re left waiting several seconds before you can fire weapons like the cycler rifle again. There are no dedicated snipers; no classes at all, in fact. Each player is adapting to the battle on the fly rather than embracing any one role wholeheartedly.

There’s no reloading, because lasers. But hold down the trigger for too long and you’ll be rendered defenceless for a few moments – a reminder to manage your blaster output more effectively. You really do have to be ok with cooldowns to enjoy Battlefront. 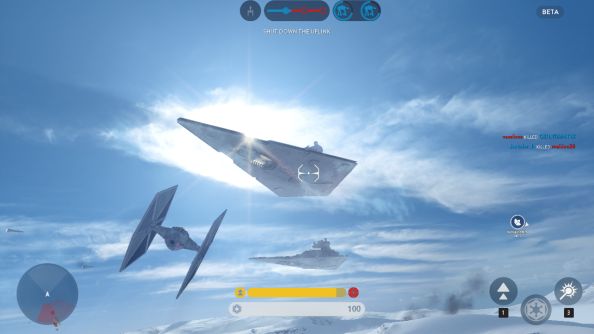 The weakest wing of the beta lies in Survival mode – story scenarios playable solo or in co-op that boil down to a series of wave attacks in a vertiginous Tatooine canyon. On Normal difficulty, the stormtroopers go down without much of a fight, and the whole affair feels a little soulless, despite Admiral Ackbar’s wibble-wobble in your ear. It’s downtime entertainment, rather than the main event.

DICE recommend you don’t attempt a Walker Assault until you’ve gained a few ranks – but this is where the full spectrum Star Wars simulation really lies. Played on Hoth in the beta, the mode finds the Rebels defending uplinks from intruding AT-ATs, with the aim of calling in a Y-Wing bombing run to turn the tide. It’s the duty of the Imperials to keep their big leggy beasts alive, and to ensure the uplinks stay offline long enough for the ATs to reach their destination.

With 40 players invited, the scale is operatic – encompassing winding base burrows, TIE-ducking trenches, and snowy, wide open swathes for the ATs to stomp through. It’s best appreciated from the air, in a TIE or A-Wing, if you’re lucky enough to bag a rare vehicle icon on the map. 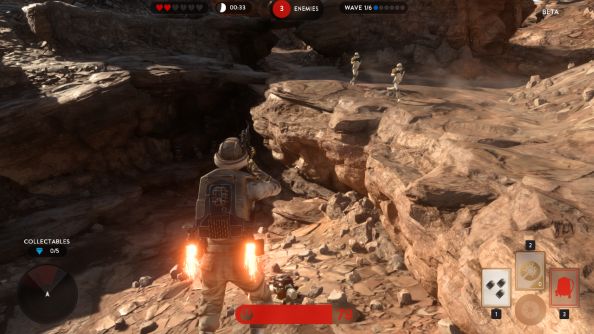 Both vehicles are simple to control – the A-Wing less so, because it turns about as fast as milk – but it’s tricky to hit anything on the ground that isn’t a big, grey robot. Between bouts of dive-bombing, you’ll mostly confine your efforts to scanning the skies, where you can lock onto enemy ships (or collide with them, of course).

It’s good fun to wiggle a TIE this way and that with the mouse, if not especially involved. It’s more fun, actually, to be on the ground, knowing that there are human beings in control of the monster machines above.

Probably more threatening to earthbound troops are the manned, camouflaged turrets that sit inconspicuously in the terrain, firing out laser barrages. It can feel very much like trench warfare – with the bigger ATs swatting players from across the map, and even basic blasters accurate at long range. It’s possible to both kill and be killed at the same time; the sluggish pace of a blaster slug is such that simultaneous hits aren’t uncommon. But you can choose to spawn alongside a partner, if they’re still living, to continue pushing an offensive. 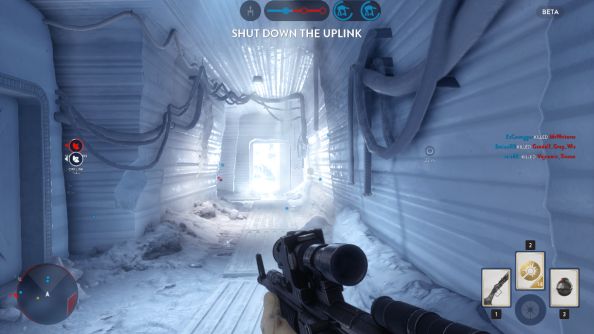 And hey, there’s Darth, cutting a swathe through the Rebel trenches. It’s a genuine shock to see him – though he’s heralded by his theme thune, there’s no mapwide announcement, nor a cutscene to mark his entrance. Powerful though his force powers are, he’s far from invulnerable to all the fire he inevitably attracts. There’s a worry that the heroes have wound up somewhat underwhelming in the interest of balance.

It’s true, though, that there’s nothing quite like being run down and sliced apart by Luke Skywalker. As with everything else in Star Wars Battlefront, it’s the sound that gets you.