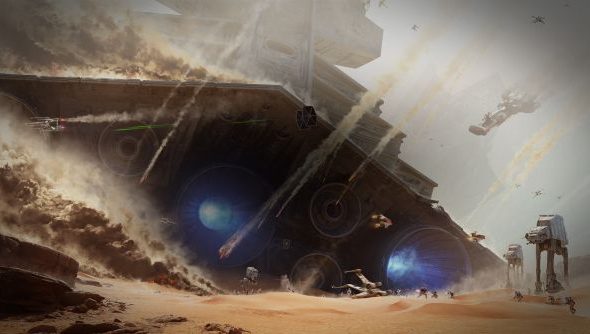 The barest of looks at the Battle On Jakku, apparently a key moment in the pre-plot for the new Star Wars movie and first post-release Star Wars: Battlefront map, has been revealed via the Playstation YouTube channel. It shows, in cinematic style, our brave rebel trooper waking up to a Star Destroyer crashing onto his head. Despite that, it’s quite exciting.

Check out pick of the bestbest Star Wars games.

At a guess this is in-engine but obviously not actual gameplay. The DICE and EA folks really are doing a stunning job of implying there’s a (very entertaining looking) single-player campaign in their game (which I would probably be more excited for if there was). Hopefully it proves a more fruitful endeavour to battle over these sandy wastes than Tim’s experiences on Hoth, which he was none too pleased with in his Battlefront Beta preview.

I do really like the bit where the Star Destroyer is crashing though, because it has a sense of scale that I’ve always felt was missing in games. It’s a technical limitation more than anything, we’re only really just now getting into the era where worrying about draw distances is a thing of the past for the majority of users. Now we’re actually capable of seeing humongous geometery falling out of the sky, I’d like to as often as possible, please. I want to be terrified by a sudden, screen-filling apocalypse, which so far only the final boss in Tower of Guns, of all things, has managed. Oh, and this Flagship trailer.

Anyway, you can get the Battle for Jakku a week earlier than its December 8th release date if you pre-order through Origin. It’s £49.99 on there, or an extra fiver for the digital deluxe edition, up to £94.98 for the version that comes with the season pass, for which no content has yet been announced, as far as I’m aware.