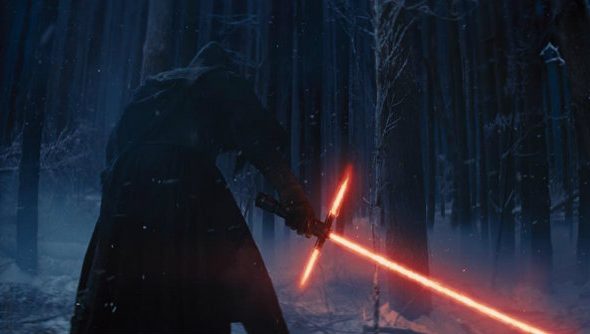 You might be wondering why you can’t take Kylo Ren’s wrist-guard beamed lightsaber to Luke Skywalker’s young face in Star Wars Battlefront. After all, when has a triple-A game studio ever turned down a chance to ride on the success of one of the biggest movies of all time?

Star Wars is a war among the stars. The stars are in space. Here are the best PC games set in space, as chosen by us.

While it might at first seem mystifying, the decision to not feature characters or moments from Force Awakens wasn’t down to EA.

“On Star Wars, the one thing that we are adhering to, and I think this is part of our arrangement with Lucas and Disney, is you can’t make a game in Star Wars that violates the canon of Star Wars,” EA chief financial officer Blake Jorgensen said during the company’s latest earnings call, as reported by VideoGamer.

“Meaning you can’t take something from the future and bring it back into the past unless it’s a reference. Not knowing yet exactly what the storyline in [Star Wars:] Rogue One is going to be, I can’t comment on how that could come in. But to the extent that it’s in the future… Our current Battlefront game is all based on the historical Star Wars canon, which is 30 years before the most recent movie, that will limit our ability to bring some new content into that.”

So they’re free to do what they want as long as it doesn’t contradict the movies. Aah, I fondly remember the scene where Luke force jumped across Hoth, defeated Darth Vader in a duel and immediately got crushed by an AT-AT.

While this means Star Wars Battlefront won’t explore any of the Disney produced Star Wars films between now and 2020 in DLC, EA are free to create new games based around them, so long as they don’t work against Disney’s efforts to make the universe consistent again.

“We’re trying to stay tightly connected to the Star Wars beat for future movies and we’ll obviously in future Star Wars games be able to tap the new characters and vehicles and so forth,” Jorgensen continued. “But in our current game and for that manner the DLC associated with that current game obviously we’ll have to be careful that we don’t violate the canon.”

EA have already laid out plans for Battlefront’s DLC, which will take players to Jabba’s palace, the Death Star and more, finishing with a final expansion pack that’s releasing in 2017.

It looks like the next few years of videogames might be as Star Wars rich as its cinema adventures.