Update September 15, 2016: Ahead of tomorrow’s trailer, EA has revealed more information on the new heroes added in the Death Star DLC.

With a release date of the Death Star DLC nearly upon us, EA has given us more information on the powers and abilities of the new heroes of this DLC. Chewbacca fights with his bowcaster, firing off extra shots with his Multi-Bolt ability. He can also buff friendly players with Mighty Roar, which gives them increased damage and armour for a short period. As you’d expected from what is essentially a walking shagpile carpet, Chewbacca is slower than all other Rebel heroes but he gets the bonus of additional health.

Want more of the infinite unknown? Here are the best space games on PC.

Reptilian bounty hunter Bossk is centred around hunting down enemy players and killing them with great precision. His Predatory Instincts ability allows him to see through walls with heat vision, alongside enhancing his damage and speed. He is more suspectible to flash grenades when in this mode and his heat vision does not allow him to differentiate between friend and foe.

While not acting as a normal hero pick up, everyone’s favourite back talking pedal bin R2-D2 acts as a support character. When you escort him out of the Death Star in the second round of the Battle Station game mode, he helps out the Rebels by stunning enemies with his extendable shock rod and scanning the battlefield to point out potential threats.

New skins are also on the way for many heroes, including Leia’s famous cinnamon bun haircut and Stormtrooper armour for both Luke and Han. You can get a sneak peek of what the DLC looks like over on the official Star Wars Twitter page and a trailer, hopefully with a release date announcement, is coming tomorrow.

Original story August 17 2016: If there’s one thing that’s always felt lacking in Star Wars Battlefront, it’s space, which is the place where they keep all the stars. Well sound the good news klaxon, because EA have revealed that on top of bringing space to the game as part of the forthcoming Death Star expansion, they’re also adding a shiny new game mode called Battle Station. The new mode splits each match into three phases, with players battling over a key objective in each phase to proceed to the next one and win the match.

The phases essentially cover all the things gamers have always wanted to do in a Star Wars game. The first phase takes the form of a space dogfight, with X-wings and A-wings facing off against TIE fighters and TIE interceptors – the rebels will want to dominate in this aerial contest in order to bring in Y-wing support. With Y-wings entering the fold the Rebel team can begin work on weakening and eventually bringing down the Empire’s Star Destroyers. From the Empire team’s perspective, the task is to simply defend the Star Destroyer’s – you’ll be assisted by AI ships to give you a defensive advantage. 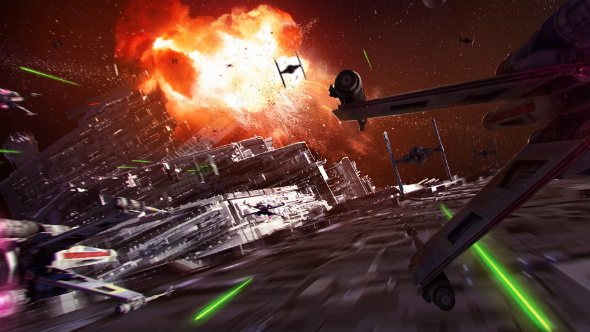 The next phase takes place inside the Death Star itself, with the Rebel team having to rescue an essential droid from the iconic space station. Once again the Empire team will be defending. Finally, it’s time to blow up the Death Star, you know, like they did in the movies. The fan service doesn’t stop there either, as Luke Skywalker in his Red-5 X-wing and Darth Vader in his TIE Advanced will both be feature as the third phase’s unique Hero and Villain offerings.

Chewbacca and Bossk will also feature in the DLC, though no details about their abilities have been revealed yet.

So not just a new map, but rather a massively orchestrated homage to one of popular cinema’s finest moments. Excited? Let us know in the comments below.