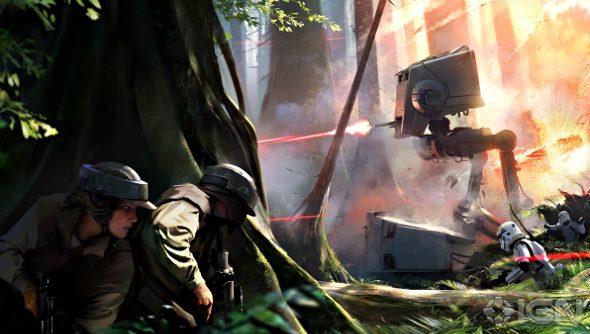 Star Wars Battlefront seems so very far, far away, with its holiday 2015 release window. But you can at least sate yourself on the few tidbits that DICE is willing to offer until that inevitable push happens around E3.

According to design director Niklas Fegraeus, the maps of battlefront, which include locations like Endor (the forest moon of) and Hoth, will be built with specific modes in mind and they’ll have different scales.

“The scale of our maps and modes offer a great variety,” Fegraeus told IGN. And it makes sense if the goal is to replicate the iconic battles rather than just providing the locations for random scraps. The sprawling Battle of Hoth, with the long line of Rebel defences being assaulted by the huge tide of Stormtroopers and AT-ATs, is nothing like the Battle of Endor, where a tiny force of, essentially, guerillas, faced a much better equipped Imperial army.

“We have actually made the decision to specifically tailor certain maps to certain game modes,” Fegraeus explained, “and what we get from that is not only incredibly varied scales, but also gameplay that will allow players to live out some of their most memorable Star Wars battle fantasies.”

DICE is also employing photogrammetry to recreate the battles. It’s a process that was used in The Vanishing of Ethan Carter, making each scene look eerily real. Unfortunately, you’ll need to be content with lovely concept art for the time being.