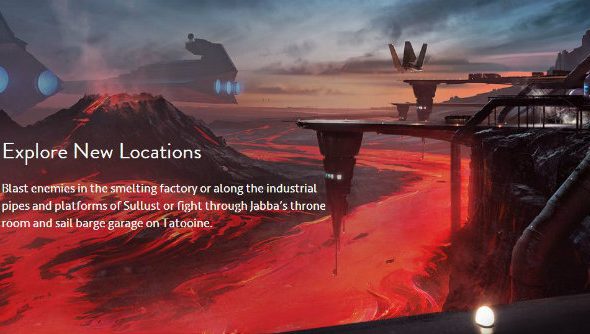 Looking for more shooting ahead of the expansion’s release? Check out the boom sticks in our list of PC’s best FPS games.

Star Wars Battlefront’s Outer Rim expansion will have players fighting among the factories of Sullust and battling within Jabba the Hutt’s palace on Tatooine. That much we already knew, but the specifics of these locations are only just being revealed.

According to the blurb on the official site you’ll be able to “blast enemies in the smelting factory or along the industrial pipes and platforms of Sullust or fight through Jabba’s throne room and sail barge garage on Tatooine.”

‘Barge garage’ is just really nice to say, isn’t it?

Next up, it has also been revealed which two “iconic heroes” we’ll be able to play as if we grab the expansion. Who could it be? Some cool Jedi or something, right? No, mate. You’re getting Greedo and Nien Nunb. No worries.

Luckily, the expansion also comes with a new mode: Extraction. In this game type the Rebels have to grab a shipment of resources and get it to the extraction point – hence the name – while Imperial soldiers have to try and melt their faces with laser fire before they do.

There’s also some new gear for you to get your hands on. You will be able to use the Relby V-10 rifle, DT-12 blaster pistol, the Scatter Gun, Dioxis Grenade, and Adrenaline Stim Star Cards.

Full details are available on the official site. The expansion, which is available as part of the Season Pass, releases some time in March.