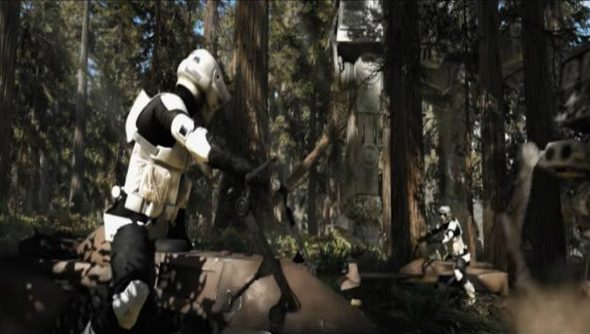 If you’ve played Star Wars Battlefront, you probably know how authentically it recreates the feeling of being on a speeder bike chase through the forests of Endor. There’s a real sense of speed. And it’s no wonder, as it turns out the speeders were developed with help from Criterion, the masters of pace.

Did you know that players will be getting more Star Wars Battlefront maps for free?

Although you can spot the development team in Star Wars Battlefront’s credits, the revelation of what the studio’s input actually was came after Criterion saw a video from Eurogamer’s Digital Foundry.

The video spliced footage from the game and Return of the Jedi, creating a showcase of how well Battlefront recreates the iconic movie scene.

Following this, Criterion put out a cheeky tweet saying, “Which development team could possibly have the expertise to put such speed into the Battlefront speeder bikes?”

Which development team could possibly have the expertise to put such speed into the Battlefront speeder bikes..? 😉 https://t.co/biWJ57tIVo

Criterion have already been working furiously on a new IP that moves away from just cars in an attempt to capture the same excitement in planes, helicopter, wingsuits, jetskis and pretty much every other Earthly vehicle.

See the video from 2014’s E3 announcement below:

It makes sense that the only way left to go from there was to tackle a vehicle from a long time ago in a galaxy far, far away.