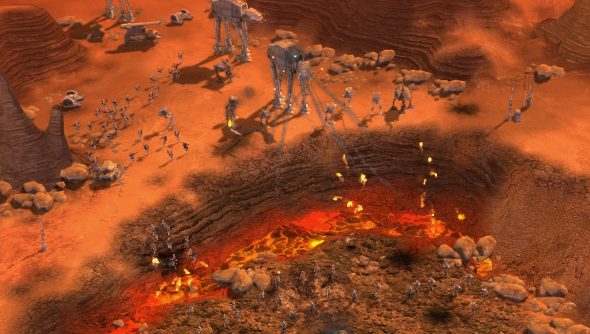 The second wave of Star Wars games continues to land on GOG’s digital shelves, filling out the roster with another three games. They’re mostly great, to boot. And while one of them’s been available digitally for a while, for the other two, it’s their digital debut.

On the strategy side, you’ll find the best Star Wars RTS, Empire at War Gold Pack. Play as the pesky rebels, the totalitarian Imperials and a bunch of good for nothing smugglers. It’s joined by Rebellion, a surprisingly good, if a bit rough, real-time 4X romp. I remember it being quite tricky, but the last time I played it was about 15 years ago, so it’s hardly gospel.

For me, though, the real treat is Rogue Squadron 3D, the X-Wing/TIE Fighter series’ arcade space shooter cousin. Along with Rebellion, this is the first time it’s been available digitally. That the sequels were (brilliant) GameCube exclusives was a blooming tragedy, and it’s been an age since the last one. I recall a rumour that the whole series was going to be bundled together and ported to the Xbox 360 a long time ago, but nothing came of it, or the series, since.

On January 27th, the last three games will appear on GOG, the excellent Jedi Knight: Dark Forces II and Republic Commando, as well as Starfighter, which was serviceable but unfortunately set during the Phantom Menace.