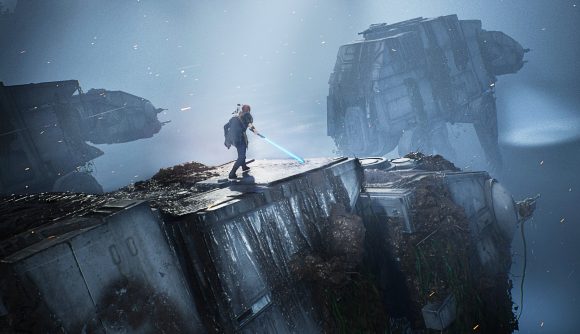 Respawn Entertainment is working on not one but three new Star Wars games. You may not be too surprised to hear that one of them is a follow up to Star Wars Jedi: Fallen Order, though you’re also getting a new first-person shooter and a strategy game.

EA doesn’t offer many details, though we know the strategy game is being developed through a production collaboration with former Firaxis art director Greg Foertsch’s new studio Bit Reactor. EA says that Respawn will be on production duties while Bit Reactor handles development. During his time at Firaxis, Foertsch worked on XCOM 2, Civilization IV, and more before leaving in 2019. Following a stint in consultation, Foertsch then unveiled Bit Reactor last week. Alongside Foertsch, you’ve also got other lead developers and creatives who worked on the XCOM series.

If you’re looking for a tease on what Bit Reactor’s Star Wars game could look like, the studio explained in a press release that its aim is to “usher in the future” of turn-based tactics games. “As game genres of all types see refreshed takes in this new generation of technology, one thing is clear in that turn-based tactic games have been greatly overlooked and have an enormous amount of room for innovation,” Foertsch said at the time.

“We have a very team-oriented culture and we’ve assembled an amazing group of talented, experienced, and dedicated game developers to inject rich storytelling, immersive presentation, and rock-solid game mechanics to give this genre its rightful time to shine – a golden age of turn-based games is upon us.”

As for Respawn’s FPS game, Peter Hirschmann is serving as game director. He initially worked for LucasArts from 2002 to 2008, joining Respawn in 2016 after stints elsewhere. During his time at LucasArts, he worked on multiple Star Wars: Battlefront games, The Force Unleashed, Empire at War, Lethal Alliance, and more – quite suited for the gig, then.

That’s your lot for now, details-wise, though Respawn is staffing up for the games and says that “work has already begun on all three of these projects”. Exciting.

There are plenty of other Star Wars games on the horizon, too. The Detroit: Become Human devs are working on Star Wars: Eclipse, and an open-world Star Wars game is on the way from Ubisoft Massive.

If you’re looking for some of the best Star Wars games you can play on PC right now, though, you need only follow that link.