Looking for a complete list of all Star Wars Jedi: Fallen Order bosses? While you’ll scarcely struggle against many of the bosses in Jedi: Fallen Order, we’re not ashamed to say we’ve bested more than a few times during the course of our playthrough – sure, it’s not Dark Souls difficult, but it’s not exactly a walk in the park either.

Plus, there are more than just the main campaign bosses to battle as you travel across planets in a bid to rebuild the Jedi Order, so if you’re struggling then we’ve assembled a handy list of all Jedi: Fallen Order bosses, complete with tips on how to beat each and every one of them. We’ve done our best to avoid spoilers, but obviously there are some hefty boss encounter spoilers, so if you don’t want to accidentally discover what beast you’ll be battling next then click away now.

We’ve also written more detailed guides on every story boss in Jedi: Fallen Order, which are all linked in their relevant sections, so you should have no problem scraping through these clashes.

This is a bit of a spoiler, so take a look at our quick guide on beating the Second Sister here. 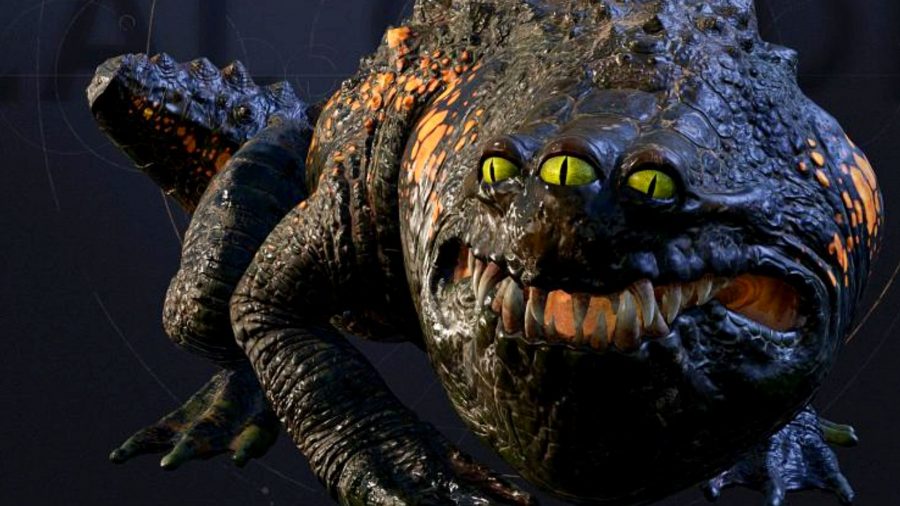 Check out our Jedi: Fallen Order Oggdo Bogdo boss tips for a detailed breakdown and for advice on severing the toad’s tongue.

You’ll face a few of these over the course of the game. You can play this safe by deflecting blaster bolts back at the AT-ST, and then using Force Push to send any mines or rockets back at the mech. Or you can go aggro by striking the legs – this is much faster and you only really have to watch out for the odd stomp or mine attack

This spider is encountered halfway across Kashyyyk and will ambush you when you enter its lair. It’s really not much different than its fully pigmented cousins, except it’s bigger, hits harder, and has more health.

You’ll encounter a few of these as standard enemies later on, but it’s worth running through the first battle. The Security Droid is very slow to strike, so you should be able to sidestep it’s heavily telegraphed lunges with ease. There is one red-tinted attack, so simply dodge-roll to the side to avoid this.

This beast is hidden on Zeffo, but doesn’t offer a lot more threat than its standard variant. Use the arena to your advantage by blocking off the Rabid Jotaz’s charges with the central pillar.

These two will ambush you after a boss fight, so they’re only really tricky as you might not have much healing left. Use the crates to split these chaps up, then it’s just a case of deflecting blaster bolts and making the most out of any attack windows as they each have pretty low health.

Bing and The Maestro

This boss fight against definitely-not-Boba-Fett bounty Hunter Bing is pretty difficult because of the tiny arena and high attacking output of the two enemies. Take your time and keep your distance to deflect those blaster bolts from Maestro. Be ready to Force Push any rockets back at him, too. The only other attack to be mindful of is the flamethrower sweep from the Maestro, which you can backstep away from and punish easily.

Then it’s just a case of rinsing Maestro’s health as soon as possible, leaving you free to take down the relatively simple Bing mech.

We love a double boss fight. Here you’ll face a massive mech and a bounty hunter at the same time. All the lessons from Bing apply, but you’ll also have to take out Daschorb, too.

Related: Here are the best mech games on PC

For the mech you need to deflect blaster bolts, and also look out for a red-tinted attack by dodge-rolling backwards just before the mech swings its fists. Get hits in where you can and you should topple this mech in no time. 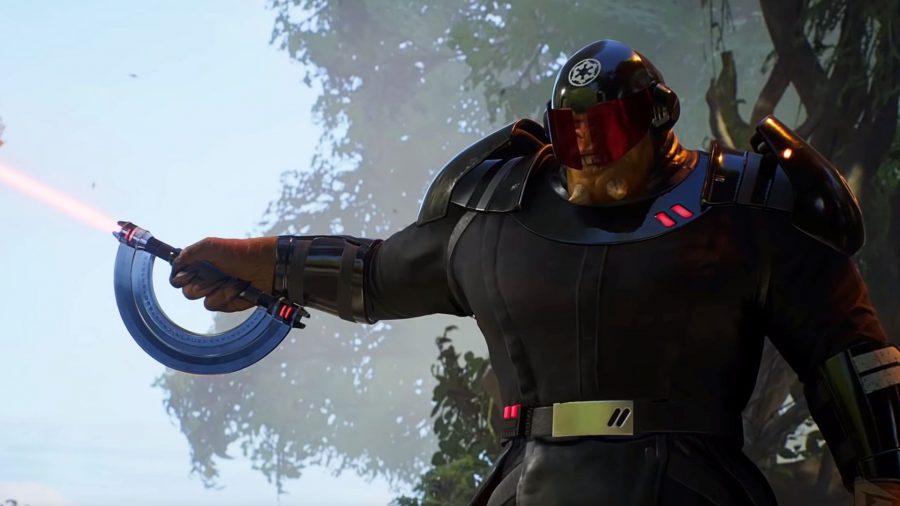 We’ve got a dedicated guide on battling the Jedi: Fallen Order Ninth Sister boss fight, so check that out first. But if you’re in a hurry: use the traditional lightsaber form and Force Flip over her shockwave attack.

Oh hey, another bounty hunter fight. This time you’ll have to beat two mercs: Atticus Rex and Null Chance. The fight is very messy as there’s a lot of ranged and melee occurring simultaneously. Pick out Null Chance and beat it first, then go after the tougher Atticus Rex using the same skills you’ve honed against previous bounty fighters.

This bounty Hunter is literally unbeatable when you first face them, but you’ll soon get the opportunity to slay Null Chance in an arena bout. While not technically part of the boss fight, you will have to defeat a few bugs before Null Chance swoops in to finish you off – except it turns out the Null Chance is super easy to kill.

Deflect blaster bolts, Force Push rockets back at the armoured goon, and Force Slow whenever she’s in striking distance to get in some free attacks. She takes very few hits to defeat, so make the most of every window.

You’ll come across this massive mech in a tight spot on Bogano, making it a little tricky to figure out. Take your time to learn the attack timings as Clunk has a few unblockable strikes with janky timings. As this is the only enemy you’ll face in this fight, Clunk is generally a walk in the park. 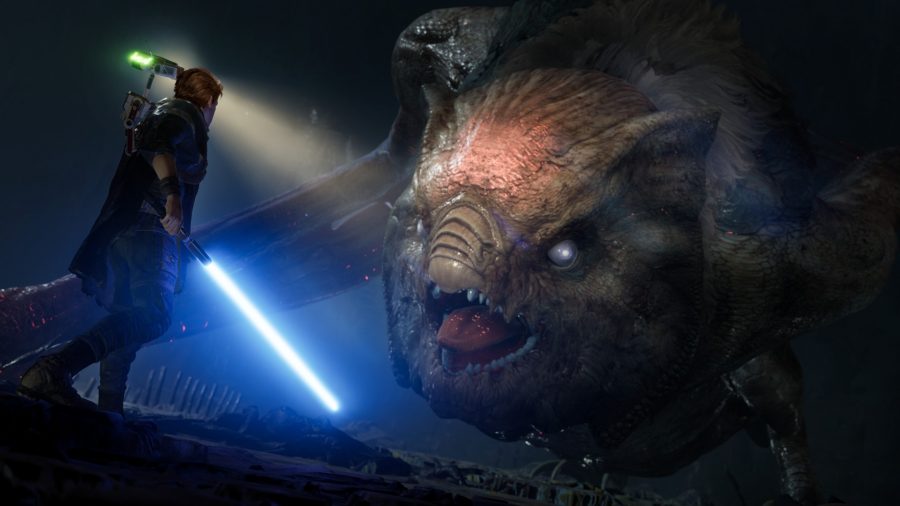 We’ve got a more thorough guide on beating the winged beast of Dathomir, so check out those notes for a clear walkthrough when you encounter the Jedi: Fallen Order Gorgara boss.

You should have faced another one of these critters so this fight shouldn’t differ drastically. The main difference is that this chap will string together longer attack chains, so exercise a bit more caution when trying to get an attack in.

Another droid X bounty hunter fight. Make sure you eliminate the bounty hunter first as he’s quite weak. Chonk is a little trickier than other mechs and will throw in a few more lunging attacks, making this quite a tough battle to read. 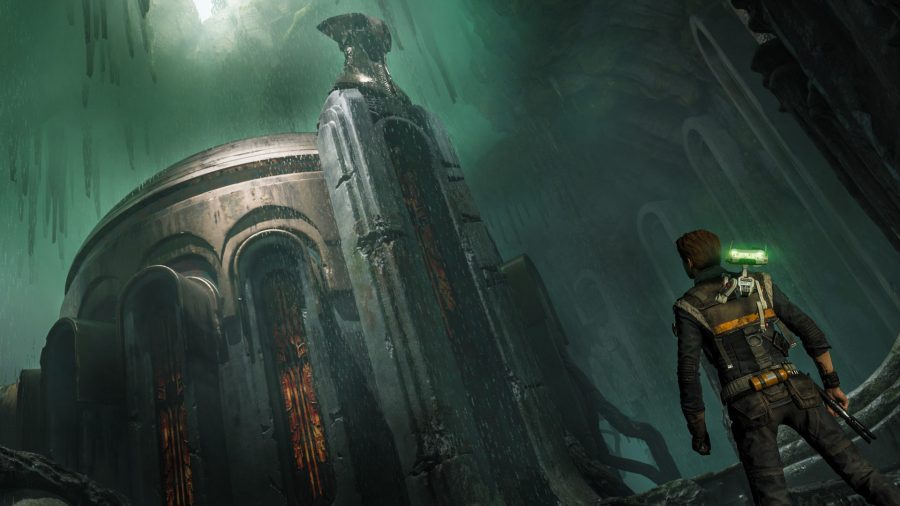 Another one of the main boss encounters… read our Jedi: Fallen Order Taron Malicos boss fight guide for a complete rundown of his moves and counters.

We’ve hidden the name of this foe for the sake of spoilers, so if you’re at this point then do pore over our Jedi: Fallen Order final boss guide for more details.

And there you have it, a full list of Jedi: Fallen Order bosses, including minibosses like the Security Droid. We’re got going as far as to include Purgetroopers, but that’s mostly because they can almost all be beaten by Force Pushing them off a cliff.