Wondering where or when you’ll be able to acquire all of the Star Wars Jedi: Fallen Order lightsaber colours? There are eight different lightsaber colours in Star Wars Jedi: Fallen Order. At the start of the game, however, your hero Cal Kestis can only use two of them: blue and green. These are of course the iconic Skywalker shades, favoured by Luke in the original trilogy.

But what if you want to rock Mace Windu’s majestic purple? Or take after the Jedi Temple Guard aesthetic with a dazzling yellow look? That’s what we’re here to tell you in our handy guide on how to get all 8 lightsaber colours in Star Wars Jedi: Fallen Order. This is a very different process to unlocking the double-lightsaber or the different lightsaber parts.

Firstly, to change your lightsaber’s colour beyond those initial two options then you need a kyber crystal. These are incredibly rare, Force-attuned crystals the Jedi use to alter their lightsaber’s colour (the Sith also used them to build ancient superweapons, but we won’t go into that.) And, wouldn’t you know it, there’s a kyber crystal hiding in the game. Unlike most Jedi who scour the galaxy looking for their crystals, you won’t need to work hard to find yours – it’s actually impossible to miss, so this is one of those guides for the impatient players among you.

All you have to do is play through a chunk of the story. After about ten hours, once you’ve completed your objectives on Bogano, Kashyyyk and Dathomir, a story mission will trigger on the planet Ilum. Use your ship’s holographic navigator to fly there and start the hunt.

Ilum is much smaller than the game’s other locations, which means you won’t have to search high and low. Expect a few simple puzzles, a bit of platforming, and some Imperial probe droids that need a good Force fling, but there’s little chance of you getting lost. Work your way along the linear path and you’ll come to a cave system underneath the Ilum Jedi Temple. Complete the fairly straightforward crystal light puzzle within and you’ll come away with a sparkling kyber krystal. Stroke it, sing to it. Just don’t drop it down the back of the radiator.

Now you’ve got it, take advantage of the option to change your lightsaber’s colour immediately. This isn’t the one and only chance you get to do that, however. To alter your weapon further, it’s simply a matter of heading to a workbench and having a tinker. The one on your ship, the Mantis, is closest. You’ll automatically be able to select all eight colours at whatever workbench you use, and once you change colour, there’s nothing stopping you changing again. 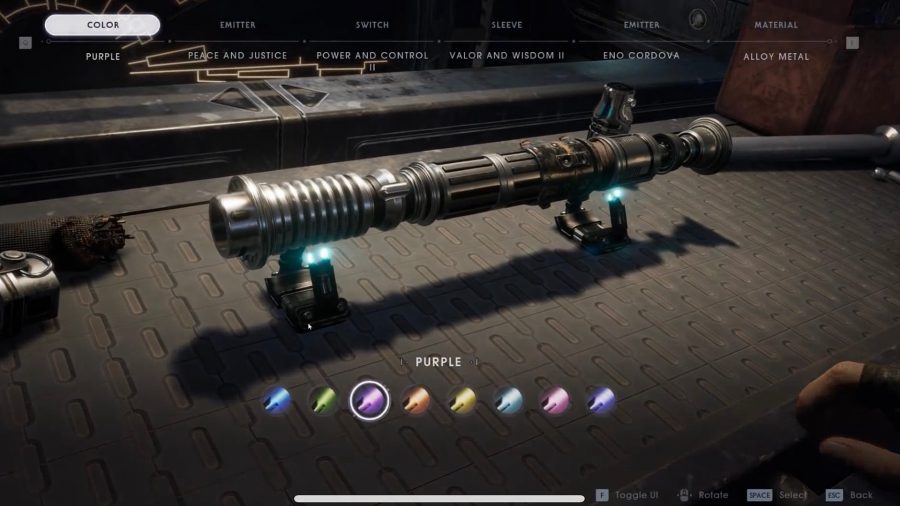 The kyber crystal lets you choose between five colours, so here’s the complete list of Jedi: Fallen Order lightsaber colors:

Add that to the default colours of blue and green, and that makes seven. So what about the eighth, orange? Unfortunately, orange is a pre-order bonus, so if you’ve bought the game outright, you’ll have to shelve your plans of travelling the galaxy and slapping people with it like the Tango Man.

There’s also no red colour in the game, although the reason for that is a little more obvious: only bad people choose red. It’s the shade favoured by the likes of Darth Vader, Darth Maul, and Siths the galaxy over. Fine, we’ll allow the omission. Still, it would have been nice to hear how it sounded. According to the game’s associate sound designer Oscar Coen, each lightsaber colour features slightly different sound effects. Listen closely and swings and idle animations vary depending on what colour you’ve picked.

So, that was our guide to getting all eight lightsaber colours in Star Wars Jedi: Fallen Order. Now you can change your blade whenever you like, taking inspiration from the weather outside, the shifting tides, or the mood in your soul.