Star Wars: Knights of the Old Republic II: The Sith Lords is probably my favourite game of all time. The first KotOR kindled my love for dialogue-heavy RPGs, but it was the sequel that force choked my heart. Ignited my lightsaber. Sent force lightning down my spine. You get the idea.

See, I was 12 years old when I played KotOR II, and I had absolutely zero chill. I adored the game, but what really captured my attention – and inspired several feverish Livejournal posts – was a certain NPC by the name of Atton Rand. I was in love with him. Truly, completely. I carried around a flash drive with my KotOR II save file on it. I wrote a sporadic email bulletin to my long-suffering cousin detailing all the trivia I’d dug up about Atton’s voice actor Nicky Katt. Did you know he was in School of Rock? What a great film. My younger brother remembers my NPC crush so well, he bought me a custom Atton Rand coaster last Christmas (pictured above).

Look, I’m not ashamed. Games make you feel things; people are moved by fiction. Just look at the body pillow industry (but then please leave them to it). My fanaticism was so intense that I never even completed the game, out of some abstract belief that leaving it unfinished means it’s still alive and that there was still more Atton out there for me to experience.

But 15 years later, how can I claim KotOR II is my favourite game when I haven’t finished it? I recently decided I am now – just about – sufficiently emotionally resilient to complete a videogame, so I reinstalled KotOR II, ready to find out if I still feel the same way about my space bae. 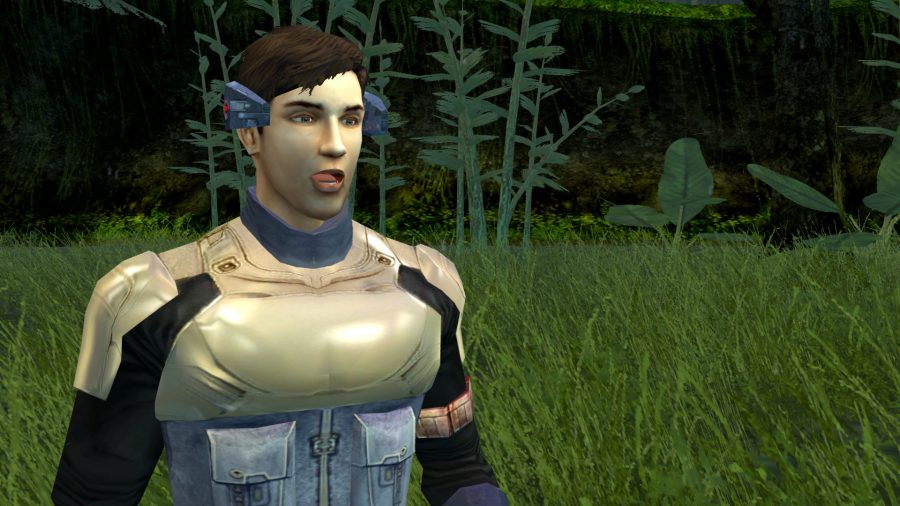 Soon I am once again roaming the corridors of Peragus, with only a weird old woman for company. I open a set of sci-fi sliding doors and there he is – Atton Rand, imprisoned in a containment cage. He instantly makes a sleazy comment about my outfit and tells me he’d shake my hand if not for the mild electrical burns he’d receive. Thanks, Atton.

Atton lowers the tone by cracking wise and being generally sarcastic

Through the first few quests, Atton and his keen sense of humour serve as the perfect counterweight to the aforementioned weird old woman, Kreia, a crone with whom I somehow have a lethally strong Force bond. She treats me with reverence but constantly attempts to teach me her nuanced moral code, nitpicking everything I do. Atton – to whom she refers as “the fool” – lowers the tone by cracking wise and being generally sarcastic, much to Kreia’s vexation.

Before too long, however, I discover Atton’s irreverent style and predilection for pazaak are part of the defence he’s built against the mental infiltrations of Force users. He reveals he used to hunt Jedi, handing them over to Darth Revan to turn into Sith. When Kreia discovers Atton’s past, she uses it to blackmail him into sticking around to help us out, but gradually Atton develops a genuine respect for me and chooses to follow me of his own volition. He even lets me guide him down the path of the Jedi. 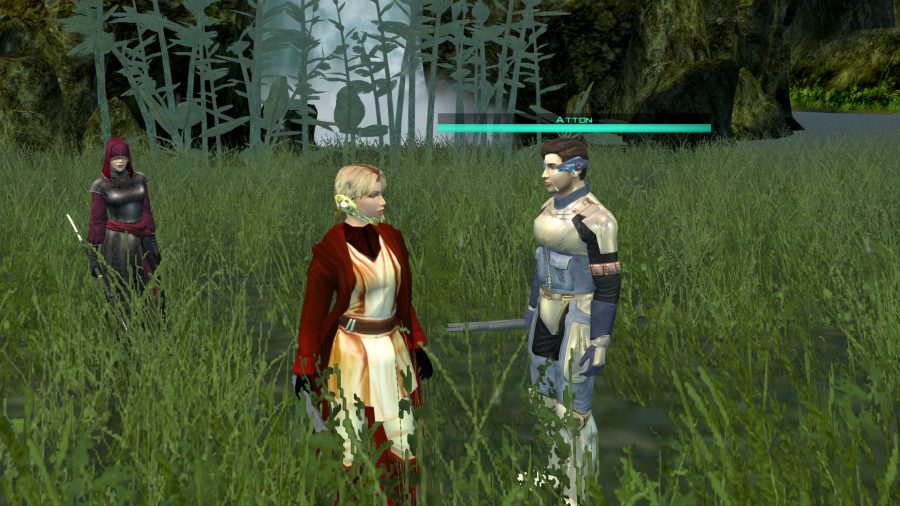 It’s all coming back to me: Atton is enigmatic, charming, and flirtatious. I look at my archive of handcrafted Atton Rand display pictures and remember why I wanted his pixelated face on my MSN profile.

Throughout the game it becomes clear Atton has feelings for me. I mean, the Exile

There isn’t a fully fledged romance between Atton and the player character – the Exile – but throughout the game it becomes clear Atton has feelings for me. I mean, the Exile. But there is no love scene before the final battle, no pixelated entanglements, not even a touching confession.

This wasn’t Obsidian’s intention, however, as I discovered on June 11, 2005. My fervent Googling of Atton Rand unearthed a series of unused scripts, cut due to lack of time. In one of these scenes Atton duels a Sith Lord and loses. As he lays dying in the Exile’s arms, he confesses he loved her all along. Upon learning this, I emailed my cousin immediately. 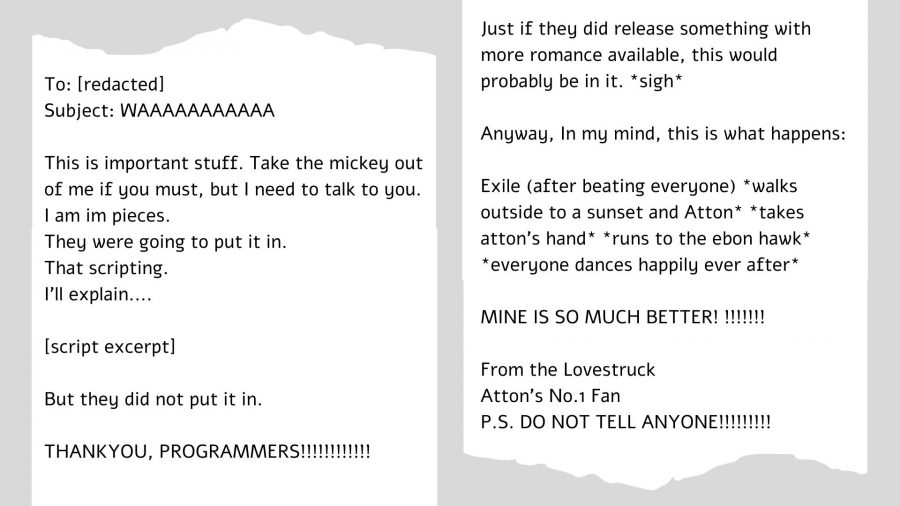 First: yes, past Jen, the alternate dance ending is far superior. And secondly, many apologies to my past self, as I have in fact, told anyone who will listen. What past Jen did not know is that this heart-wrenching, tragic content was actually added back in to KotOR II, thanks to the fan-made Restored Content Mod.

I was indeed playing with the Restored Content Mod installed. I also knew that the death scene could be avoided; during that fateful duel, we are in control of Atton, and if he wins he escapes with his life. I was resolved, then – I get one shot. If we lose the fight, I play on, and watch my childhood fears come true. But if these past 15 years of gaming have given me the skills to beat Sion down like the creepy patchwork quilt of flesh he is, then Atton gets to walk into the aforementioned sunset and offscreen dance party.

Obviously I won. I’d had 15 years to prepare. Following Atton’s incredible display of combat prowess, I was back in the Exile’s Jedi boots, steering her towards the denouement. As I confronted the game’s final boss, and the tale drew to a close, I finally got the closure I’d been missing. And yes, KotOR II had done it again; I was completely swept up in the story, and in the fate of my companions. 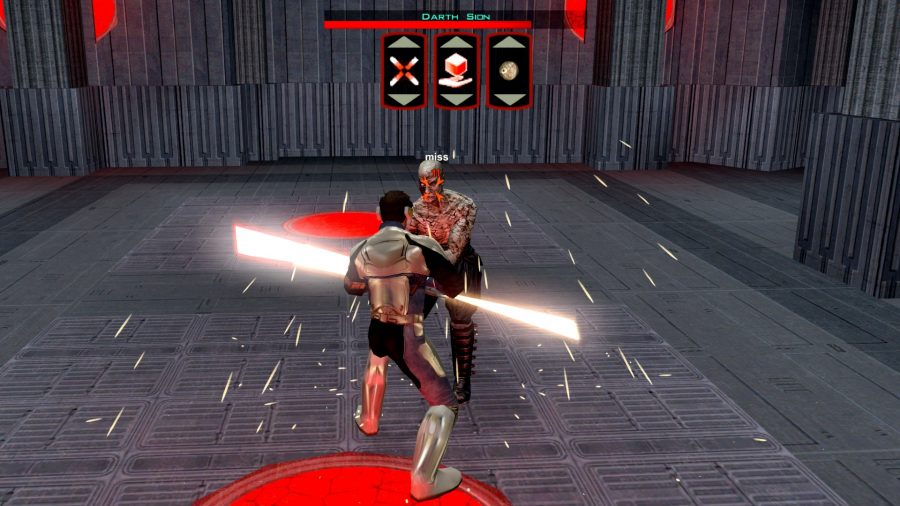 KotOR II’s story is not your typical Star Wars tale of good vs evil, but of an individual’s relationship with the Force, and their attempt to navigate murky moral waters and deal with the actions of their past. In Star Wars, the Force is often conflated with inner strength – KotOR II instead paints it as an external presence, with its own agenda of ‘balance’ and its own means of influencing people to that end. Kreia, our mentor, believes the Force robs individuals of their agency and that only the Exile, who became deaf to the Force, can truly claim their strength as their own.

I could say that now I’m older and ostensibly (if not actually) wiser, I’m better able to appreciate the nuanced, thought-provoking writing, all the clever philosophy, and other vaguely grown-up sounding things. But I think that would be doing my preteen self a disservice. I believe I appreciated the game just as deeply back then, and then funnelled the profound emotional impact KotOR II had on me through the lens of romantic obsession.

After the final fight concludes, the Exile turns to leave. Atton is standing there, leaning casually against the archway. “Need any company? I mean, I’m not doing anything.” The Exile walks past him; he follows. “I mean, because last time, we were heading toward this mining colony on the edge of space, and there was this Sith Lord, and…”