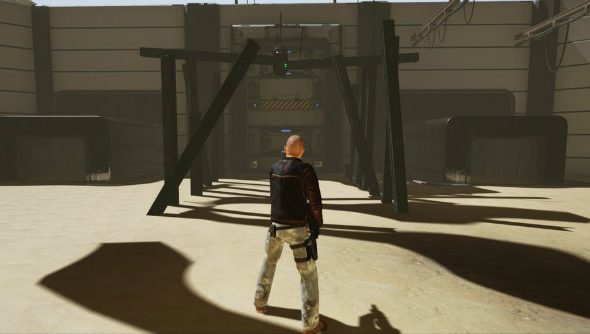 If you haven’t heard about it, a group called Poem Studios are working on a modern remake of BioWare’s Star Wars: Knights of The Old Republic, and it’s planned to be released to people who already own the game, like a massive mod. They’ve just released the first in-game footage, and it looks wonderful.

Apeironis planned to release for free, and there are a bunch of other ace games that cost nothing in PCGN’s list of PC’s best free games.

Obviously the game will still be in third-person, but this footage walks you through the locations in first-person so you can take it all in.

It’s pre-alpha, but we get to see a glimpse of places like Lower City Taris, now complete with sufficiently futuristic neon signs and shiny metallic structures. There’s the Endar Spire ship – all automatic doors, glass canopies peering into space and sterile corridors.

You might be worried that the project will get shut down –as these things tend to do-but the developers seem convinced that they’re safe because players will require the original game if they plan to play it. Apeiron uses the original audio and music, y’see. It’s essentially a really big mod, the creators claim.

The developers have so much faith in their legal standing that the website has a section called ‘Is this legal?’, to which the answer is ‘we believe so’. Oh to have such conviction.

At least they’re doing the right thing, though, and aren’t asking for any money. Even donations won’t be accepted, as the devs openly admit: “the world of remakes have, unfortunately, a poor track record when it comes finishing a project.”

Bravo on them for being so open about everything. Now we can only hope they don’t get told to pack it in by a bunch of angry lawyers. Follow progress over onApeiron’s official site.