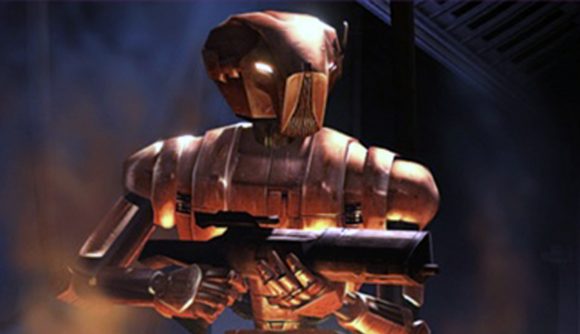 The E3-like PlayStation Showcase earlier this month brought with it the long-awaited announcement of a full remake of Star Wars: Knights of the Old Republic – one of the best RPGs of all time. Now it seems like we almost got a KOTOR remastered collection of both games in the series instead, from the ex-BioWare staff at Beamdog.

As Sony’s showcase stream revealed, the KOTOR Remake is on its way from Aspyr Media – and it’s definitely coming to PC, by the way – but fans almost got something very different instead. One interesting part about the Remake is that original developer BioWare doesn’t appear to be involved at all – so it’s surprising to learn that one of BioWare’s founders actually pitched another way of bringing back KOTOR.

According to Beamdog CEO – and BioWare co-founder – Trent Oster, his studio actually pitched a remaster called the Star Wars: Knights of the Old Republic – Reforged Collection, which seemingly would including both KOTOR games. Given Beamdog is responsible for the remasters of RPGs such as Baldur’s Gate 1 & 2 and Planescape: Torment, it would seem a natural fit.

Trent Oster revealed on Twitter that Beamdog pitched KOTOR remasters – rather than Aspyr’s upcoming total remake – to Lucasfilm Games, who obviously didn’t go for it. “Now we finally know who beat us to it,” Oster said, alongside posting a sneak peek at the pitch – which strongly suggests Beamdog wanted to include both KOTOR games into one collection, whereas the remake will only be the first game.

Here's a peek at our failed pitch: (The Reforged Collection). I always find it sad to look at failed pitches after the fact and think about the hard work that went into building them. pic.twitter.com/nqg12m2NAw

While a Knights of the Old Republic remake is potentially more exciting, it’s also basically a brand new game so it’ll likely be years before it releases – but an HD remaster of KOTOR 1 and 2 probably could’ve been out as soon as this year. Regardless, the return of arguably the best Star Wars game ever made is something to be excited about.