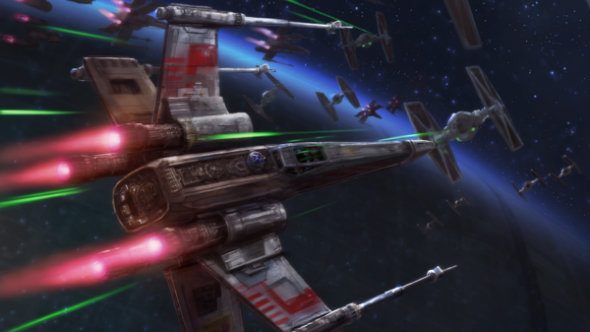 Feel like strapping yourself into some retro X-wing action, but your bank account is weaker than Luke’s ability to lift his fighter from the swamp? Fear not, as the new Star Wars Humble Bundle starts at just $1 for four of these golden Star Wars oldies: Knights of the Old Republic, X-Wing Alliance, X-Wing vs TIE Fighter (which was my first ever space sim, where I spent more time trying to get my sound card working than actually playing the game) and Galactic Battlegrounds Saga. Don’t worry, I’ve never played that last one either. Spend a tad more though, and you can scoop up a whopping 15 Star Wars titles for less than a cost of a round of beers at your local.

All these Star Wars titles not enough for you? Soar among the stars in our list of the best space games.

If your account is a little more robust, say hovering around the price of a joy ride in the Millennium Falcon ($9.84 to be exact), you get another five titles – Battlefront II, Jedi Knight II: Jedi Outcast (which still has the best online lightsaber fights ever), Starfighter, KOTOR II: The Sith Lords and Rebel Assault I and II. There’s one more force level to be achieved though.

I’m not sure the next step up is such good value though. Pay $35 and you’ll get all of those games… and an X-Wing vs TIE Fighter T-shirt. As with other Humble Bundles, you can divvy up where the money goes, between Disney, the Humble Bundle team, and the US branch of UNICEF. Just get a move on, as the deal only lasts until February 21.

Head directly to theStar Wars Humble Bundleto get your Force on.