Playing through the campaign of Star Wars: Squadrons only really prepares you for so much. The missions are designed to be experienced as a story campaign – a very good story campaign according to our Squadrons review – while fighting against other players in multiplayer dogfights is another matter entirely.

When they’re not ploughing into asteroids or each other, you may find that enemy ships have more firepower than you can deal with. If you’re fighting higher level players, this is probably because they have unlocked all of a ship’s components and found the one the Squadrons loadout that works best for them. In order to unlock a ship’s components, you’ll need to earn enough Requisition. You’ll get some Requisition by levelling up, each level requiring experience earned by playing any of the game modes.

When you do reach level 40, you’ll be able to buy every single component in the game. Once you’ve achieved this lofty goal, or earned enough Requisition to unlock the right components for your ship’s builds, take a look below for the best Squadrons loadout for every available ship for both the New Republic and the Empire.

Each of the ships can be separated into four classes:

We’ll begin by showing off the best loadouts for the New Republic ships, explaining the advantages the loadouts bring to each ship class’s tactics, then move on to do the same for the best builds for the Empire’s TIE fleet. 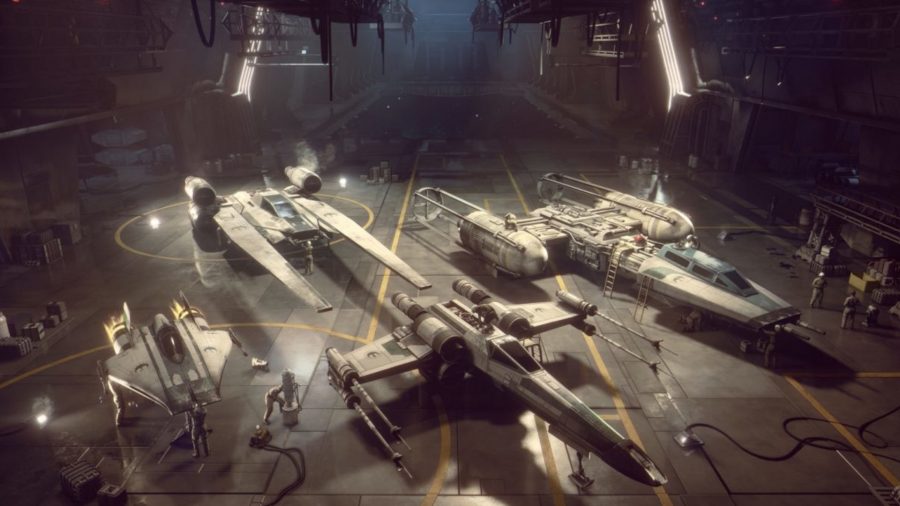 The most iconic of Star Wars’s ships from the Republic, you’ll want to strip your enemy’s shields with the Ion Cannon first, then hurl a barrage of Cluster Rockets to take out the enemy ship. You’ll be taking a lot of damage too, so having a Repair Droid mend damaged parts is ideal.

You are a little more vulnerable from being attacked, so having Seeker Warheads deal with incoming rockets. To keep enemies off the balanced Ferroceramic Hull, you’ll want a Nimble Deflector to protect you in shorter bursts as you’re more likely to use hit-and-run tactics. It doesn’t protect for as much damage, but it does recharge quickly. Since you want to ensure you never lose sight of the enemy, the Microthrust Engine is a good pick. 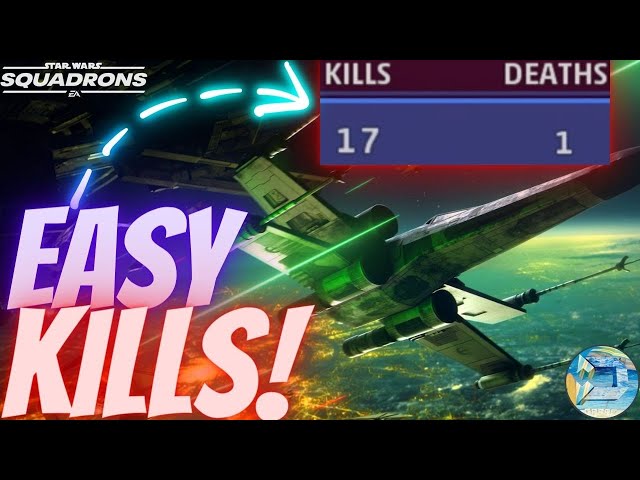 This build comes from YouTuber Grrae and is frankly ridiculous. The idea is to use the Quick-Lock Missiles to force your opponent to use their flares, then lock on with the Cluster Missile to make them explode like fireworks. The Cluster Missile fires up to four missiles at once to deal 450 damage per missile. That’s some serious firepower. You don’t need to change the primary laser weapon as it’s good enough. 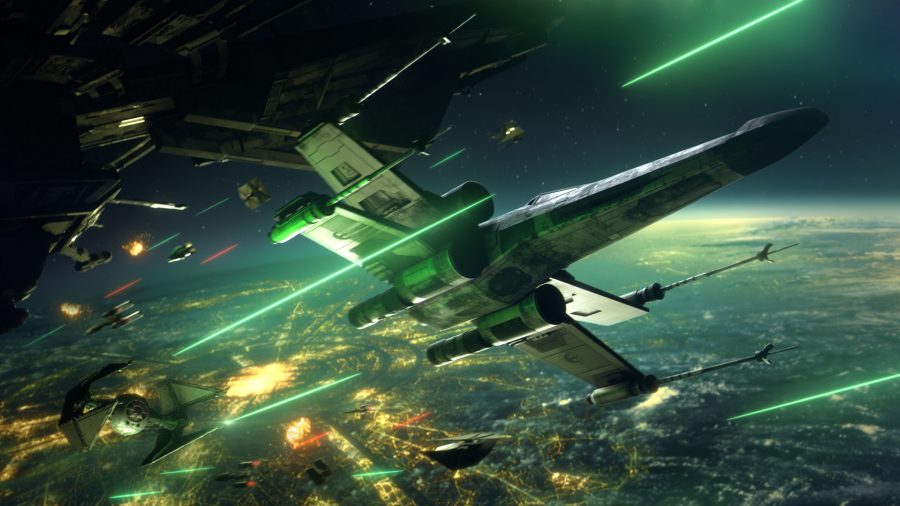 Since the Y-Wing is trying to blow up capital ships, this loadout’s aim is to deal as much damage as physically possible in short bursts. You’ll want to have the Rotary Cannon as your primary weapon, with the targeting reticle trained and fixed on enemies. Both Ion and Proton bombs can also be fired at larger targets.

The rest of the build wants you to avoid damage where possible. Both the Sensor Jammer and Dampener Hull do a good job of this, while the Conversion Shield absorbs lots of hits.

More like this: Here are the best PC space games

For moving around, the Sublight Engine will do exactly what you need it to do: get you around without having any drawbacks.

This defensive build is designed to ensure your teammates eliminate your attackers before your attackers eliminate you. It’s done through a mix of defensive equipment, like the Seeker Warheads, and Deflector Hull, while also giving your teammates a boost with the Supply Droid that repairs and re-arms allies, and the Tactical Shield that provides a temporary bonus shield to a nearby ally.

The SLAM Engine is perfect for short bursts of speed while outrunning enemies, as it automatically generates afterburner fuel. It may be slower than regular ships, but sometimes a quick burst of speed is all you need. 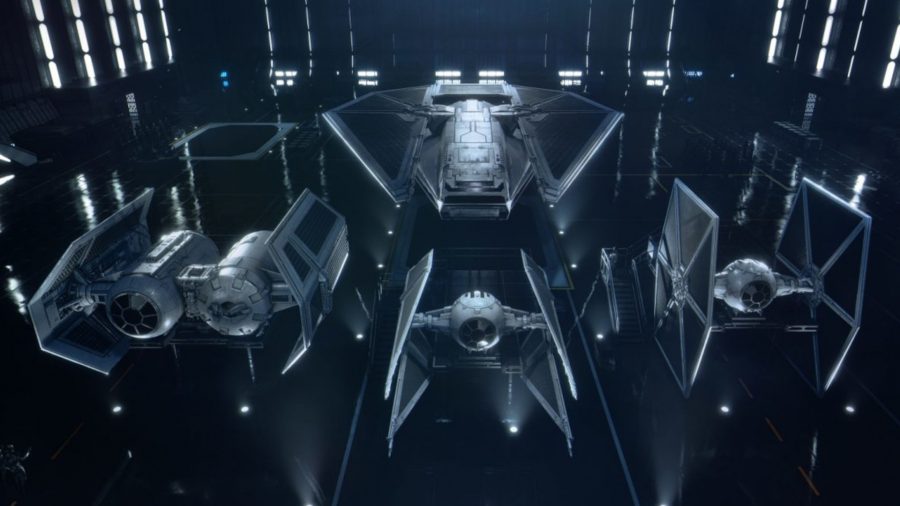 If the X-Wing is the most iconic Republic spacecraft in Star Wars, then the TIE Fighter is the Empire counterpart. The Ion Torpedo specialises in stripping shields, while the Proton Torpedo annihilates the enemy’s hull once it’s exposed. When you’re not using the one-two torpedo punch, the Burst Cannon is a decent option for whittling down shields or that last bit of health.

The TIE Fighter is a hit-and-run specialist, so naturally you’ll want quick bursts of speed and some protection against enemy fire. The SLAM Engine slowly generates afterburner charges for quick bursts of speed, so you can nip in and out of range, while the Sensor Jammer and Dampener Hull keep you safe while attacking.

This empire build has the same offensive tactic as the Republic A-Wing build from YouTuber Grrae does. Once again, you’ll want to fire off a faster locking missile to trigger enemy flares, in this case the Anti-Starfighter Missile – before locking on and firing a full salvo of Cluster Missiles. The Cluster Missile fires up to four missiles at once to deal 450 per missile. That’s some serious firepower. The Standard Laser Cannon is good enough for the rest of this build’s offensive weapons.

For this ship’s countermeasures, the Sensor Jammer is the way to go. It ensures missiles that are locked onto you lose you as a target. It also ensures nobody can lock onto you for a short period of time.

Since you like Star Wars: Here are the best Star Wars PC games

The Dampener Hull works the same as the Republic version – slowing down enemy lock-on time by 100% at the cost of 10% max health. Finally, the Twin Propulsion Engine dramatically increases your acceleration at the cost of a bit of manoeuvrability. 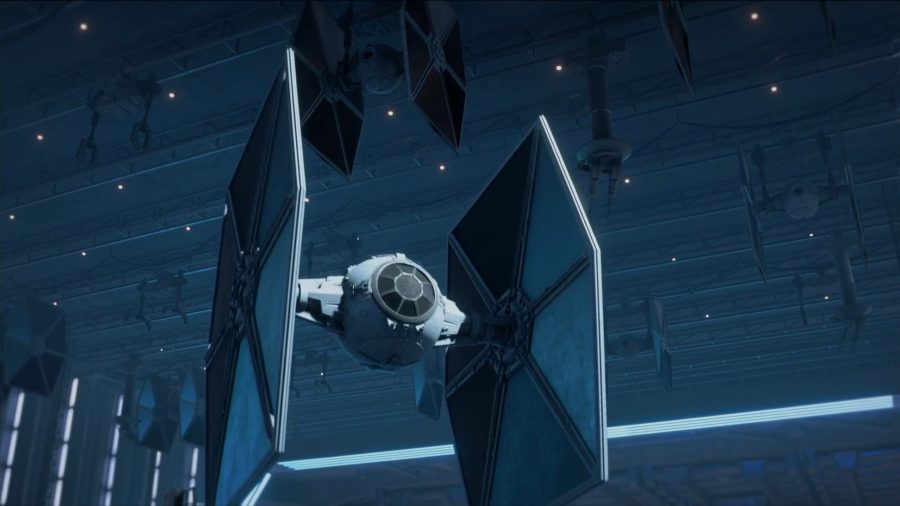 Fancy a build where you don’t need to think too much? This build is centred around the Rotary Cannon’s amazing auto-locking ability. Just wait for the reticule to turn red, then keep it on the enemy to fire a blizzard of lasers at them. Add on the multi-lock missiles for extra firepower, and you should destroy them with ease.

The rest of the build doesn’t really matter a great deal, but the default loadout for countermeasures, hull, and engine seem to work great. Manoeuvrability would be an area to focus on, as you’ll want to keep that cannon trained on swiftly moving spacecraft. To that end, the Microthrust Engine may be the best choice for this ship.

Since the Reaper is meant to be a support ship, the idea with this build is to annoy the enemy by being hard to kill, and have your attackers meet their demise to your teammates. You can certainly do some damage too with the Guided Laser Cannon, but remember your aim is not to be the primary damage dealer. The Targeting Beacons are helpful to your teammates as affected enemy ships take more damage. Turret Mines unfold into autonomous laser turrets that blast enemy ships as they pass the turret’s range. They’re best used in tight-fitting gaps.

You will want to stick around for a while to distract the enemy, so the Reinforced Hull achieves just that. Both the Seeker Warheads and Scrambler Shield are designed to help you avoid damage. Since you’ll want to get out of harm’s way and fast, the Twin Ion Engine is your best bet and offsets some of the bulk from your hull.

And those are the best Star Wars Squadrons loadouts we’ve found so far. We’re sure that balance patches will either buff or nerf some of the individual components over time, but these loadouts do at the very least give a good idea of the things that work well for certain ship types.