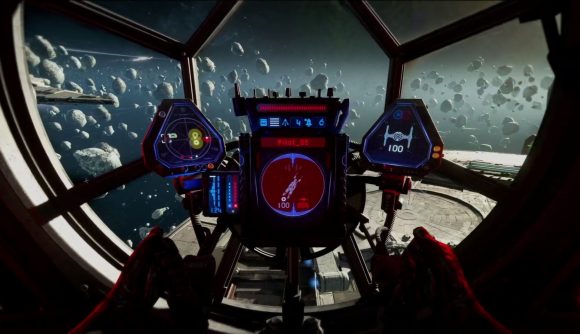 When Star Wars Squadrons first leaked last week, it wasn’t initially clear whether the game would be an arcade shoot ’em up similar in style to the space battles in Star Wars: Battlefront II, or a more simulation-style affair, reminiscent of the beloved X-Wing and TIE Fighter games of the 1990s. Now we know that it’s the latter: Star Wars Squadrons is played from the pilot’s perspective, and you’ll be soaking in up-to-the-nanosecond information about your ship through working cockpit instrument panels.

As EA has shown in a gameplay trailer broadcast during tonight’s EA Play event, these instruments feature Star Wars-style readouts that provide information on your shield deflection and engine power, and how power is balanced between the two systems. Managing this balance was a key element of the old TIE Fighter games, and it’ll be a nostalgia spike for anyone who played those to see it present in this modern format.

As you play Squadrons, EA says you’ll be unlocking additional content for your ships. These include upgrade modules for your various ship systems that can change or enhance its handling or offensive capabilities. But you’ll also be able to make your cockpit feel a bit more like home, too.

As we saw tonight, cockpit dashboards have space on them for all the Star Wars bobbleheads and knick knacks you can imagine, and EA says these can all be earned through gameplay alone – although the company hasn’t explicitly ruled out microtransactions speeding the process up a bit, or a premium battle pass-style system. We’ll have to wait and see.

You’ll be able to go beyond the in-game bobbins if you want, as earlier this week, Squadrons creative director Ian Frazier revealed that the game will also fully support joysticks and HOTAS hardware – in other words, you’re weapons free to start building that X-wing sim pit you’ve been dreaming of since 1997.