It’s all well and good having the right Star Wars Squadrons loadouts, but you won’t survive five minutes out there in this space game if you don’t know how to drift. It’s what separates the ace pilots from the novices that get blown up in the background of Star Wars movies. To take your piloting skills to the next level, you’ll want to know how to perform them consistently.

Drifting is where you turn your vehicle of choice quickly while going at speed. In Star Wars Squadrons, drifting allows you to turn your ship quicker than normal, while maintaining a decent speed and not making you a tempting stationary target. It’s useful for making evasive manoeuvers when being attacked by enemies or weaving through tight corners to help an ally that’s taking heavy fire.

While you’re learning how to drift, we recommend that you practice in the dedicated practice mode. This is full of broken debris that makes for a great place to master turning sharply. It has a dedicated timed obstacle course that you can run to get the best time, as well as deployable enemy squadrons to practice drifting during combat.

Once you’ve loaded practice mode up, we’ll get started with learning how to drift in Star Wars Squadrons.

How to boost and drift

Here is how to drift in Star Wars: Squadrons:

If you can manage to execute the regular drift, congratulations! It’s a tad bit difficult to get right consistently, but you’re definitely on the right track. However, there’s an even more advanced type of drifting that requires a bit more work to get right, but mastering this will put you ahead of the majority of the pack. Micro-drifting sounds so easy on paper, but it’s not something that’s immediately obvious. 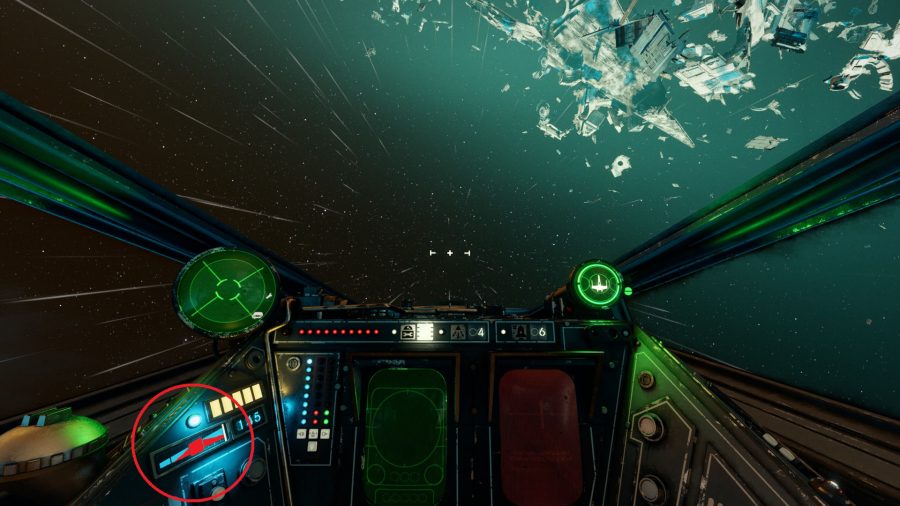 Take a look at that throttle gauge, in particular the shape. It actually displays two separate gauges: the main one showing speed, and a sub-gauge that shows your current manoeuvrability. In the image above, we’ve highlighted the manoeuvrability in red to show what it looks like for an X-Wing, whereas normally it’s just a slightly different shade of blue. All ships have a similar pattern though. Towards the end of the middle ‘chunk’ of that gauge is where you get the best speed at maximum manoeuvrability.

So how does this factor into micro-drifting? Whenever you use a boost, no matter where your throttle is, you’ll always reach maximum speed. So if you keep your throttle at the end of the middle chunk, rather than at full throttle, you’ll maximise your turning circle when going into a drift, thus surprising enemies chasing you down. 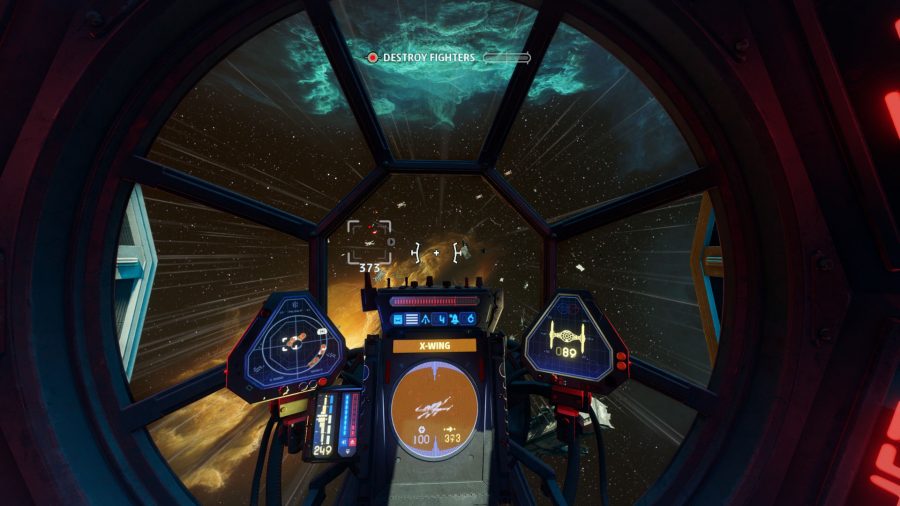 When you should use a drift

Put simply, you should be using drifts whenever you need to move around quickly. The most obvious scenario is when you are being chased by an enemy spacecraft. You can use it to sharply turn out of harm’s way of space debris, or to perform a 180 degree turn to shoot down an enemy missile that’s locked onto you.

You can also use drifts to change direction quickly. Let’s say a friendly pilot is being shot at by two enemy ships and desperately needs your help. If they are to your left, a regular turn may get you there too late to save them, but a drift may let you fire at one of their attackers, forcing them to disengage. Your teammate will thank you for the assist and you could even organise a counterattack on the assailants.

That is all there is to drifting and micro-drifting. So long as you practice flying around in this great Star Wars game beforehand, you should have the upper hand while dealing with the vast majority of pilots out there. It is just one part of becoming a master pilot though, and we’ve got some more general Star Wars Squadrons tips to help you with the rest of the basics.