Since Star Wars Squadrons was announced, we cranky old PC gamers have had one question: how much is it like X-Wing and TIE Fighter? There seemed to be little reason for EA to chase the highs of classic space simulation games, but remarkably, Squadrons does have plenty in common with those old-school favourites. Today, the devs have broken down exactly how the power management system works.

The difference in Squadrons is that you get bonus abilities when you max out the energy for one of the subsystems. You can charge an arcade-style speed boost when your engines are maxed, for example. You can overcharge your lasers, giving yourself a damage boost until the stored-up extra power runs out. And you can similarly charge up overshields for your fighter, boosting your shields up to 200%. (Separately, you can also divert shields to cover the front or back of your fighter, perfect for when someone’s on your tail or you’re about to make a run on a capital ship.)

But as Star Wars fans know, not every starfighter on the ship roster has shields. Lighter classes of TIEs get slight bonuses to speed, maneuverability, and damage instead, and they also get a rapid power shift option, which lets you kill your engines for a quick laser overcharge, or kill your weapons in favour of a speed boost. 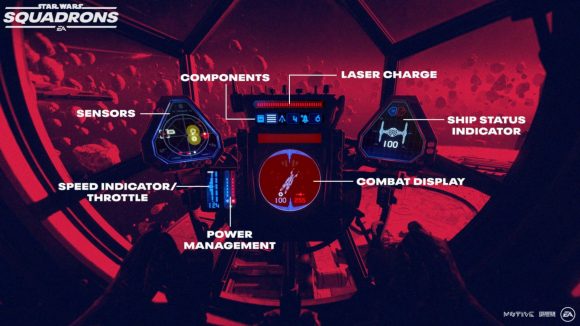 Plenty of these options will, indeed, be optional. You can switch between a simplified power management system and an advanced one, and the devs have already noted that you’ll have access to a “hardcore mode” that makes it even more flight sim-like.