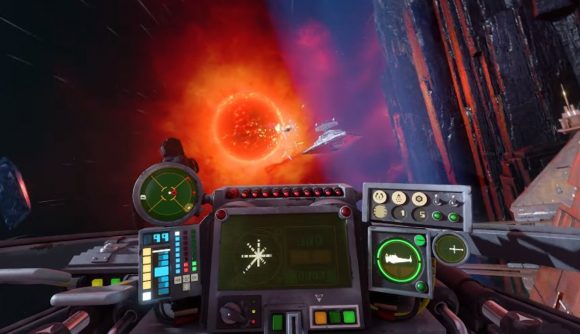 The latest free update has rolled out for Star Wars: Squadrons, bringing two new ships, custom multiplayer matches, and a long list of tweaks and changes to the space game.

Per the patch notes, the latest content update adds a ship to either side of the galactic struggle for supremacy. For the New Republic Fleet, we have the trust B-Wing, a sturdy pair of wings that plays as a heavy gunship, with low maneuverability, that’s best as part of a strong backline to dole out heavy fire. It has an ion beam, to hammer on the enemy’s shields. On the opposing side, the TIE Defender joins the Imperial Navy.

An “anti-starfighter specialist”, the TIE Defender’s a frontline machine that can deal damage and take it, having strong shields. Some decent skills in power management is needed for peak performance, so not ideal for fledgling pilots. Some changes made for both armies include a clarification to the deployable turrets to make their function more understandable, the rotary cannon no longer absorbing laser power as it charges, and 50% extra damage to players that take a hit while charging the plasburst cannon, to emphasise it’s a chase weapon, and not for head-on battles.

Custom games and a server browser can be found in the multiplayer and training menu. Skill rating requirements have been updated, as have gain/loss ratios, to better calculate your performance, and the usual long list of pokes and prods to hopefully make the multiplayer game fairer and more fun for everyone.

The previous update, in November, added a new map, Fostar Haven. If you need more pew pew in your life, we have the best Star Wars games to give you just that.