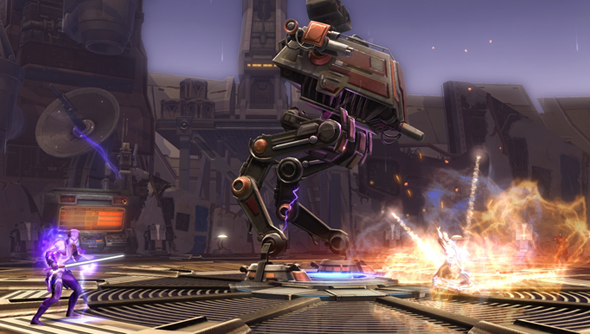 With Shadow Realms banished, Star Wars: The Old Republic has once again become the primary concern of BioWare Austin. Imagine each letter of its overlong name taking up an individual day in their calendar. And then repeating, for emphasis.

The MMO’s latest update, 3.1, finds pirate haven Rishi awash with blood yet again. Two co-operative flashpoints have been retuned to match the level 60 cap introduced in Shadow of Revan.

Building a BioWare-style MMO clearly involved some very complicated (and in some cases, very conservative) design work. But while SWTOR’s raids can prove anonymous, and the conveyer belt quests of its open worlds consequence-free, flashpoints got the scale just right. If you’ve never tagged along on one, think Mass Effect’s story-critical missions played in co-op.

Two existing four-player missions have been amped up for level 60 players: Blood Hunt, in which a bored Mandalorian bounty hunter offers valuable information in return for a good scrap. And the Battle of Rishi, where players will face recycled Sith lord Revan alongside a new bonus boss who threatens Ranged Flurries: a Commander Mokan.

PvP Season 4’s kicked off too, if you’re into that sort of thing. Giradda the Hutt and Baron Deathmark will be overseeing proceedings, and handing out TBA rewards as lavish as their titles.

Early this month, BioWare suspended SWTOR players exploiting a teleportation bug. How’ve you found their support for the MMO in recent months?