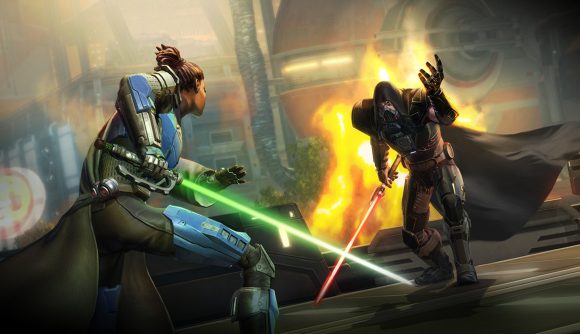 The release date has been pushed back on the Star Wars: The Old Republic expansion Onslaught, moving from September 2019 to October 22, 2019.

In a news post on the official site from senior producer Keith Kanneg, it was announced that due to all the feedback the team has been receiving on the Onslaught’s Public Test Server as well internal play-testing, a little more time is needed to make sure everything works properly and all issues are addressed.

The studio has been taking in player-data since late June, and already there’s been a variety of alterations implemented. Kanneg didn’t go into specifics, but he did provide a small list of ways he and the other developers have been tinkering with the expansion: six-piece set bonuses have been removed and four-piece set bonuses have been adjusted, and the Bounty Hunter class has had a tactical a rejig. The same tactical overhaul is coming to Republic classes and similar can be expected class-wide.

There will continue to be weekly refinements as the full public release looms. Onslaught is the first expansion pack to come out for Star Wars: The Old Republic in three years, the last being Knights of the Eternal Thrones in December, 2016. No doubt the community has gotten restless in that time, making it all the more imperative the new content is as promised.

Star Wars: The Old Republic turned eight this year, having survived as a paid-for MMORPG in an age when online gaming is becoming more and more free-to-play.

If you’re a lapsed player, or have always fancied yourself the next Boba Fett, Onslaught would be as good a place as any to dive in come October.