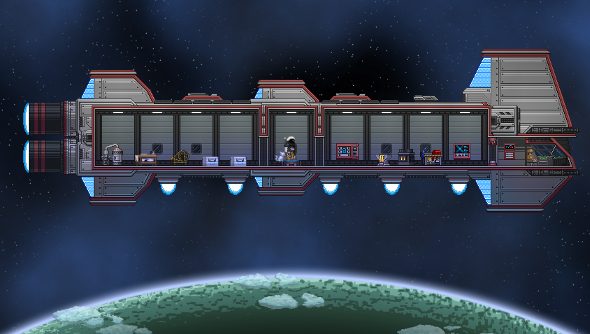 Welcome to the second installment of Early Access Later On, a new series where we take a look at Early Access games that have had time to ferment. Last time, we took another look at DayZ, and now we’re checking in with Starbound, Chucklefish’s 2D space sandbox.

Looking for more experiences that encourage exploration? Check out our list of the best sandbox games on PC.

If, for some reason, you’re not familiar with Early Access, it refers to in-development games that you can already buy – often, but not exclusively on Steam – and ostensibly assist in their creation by providing feedback and searching for bugs. 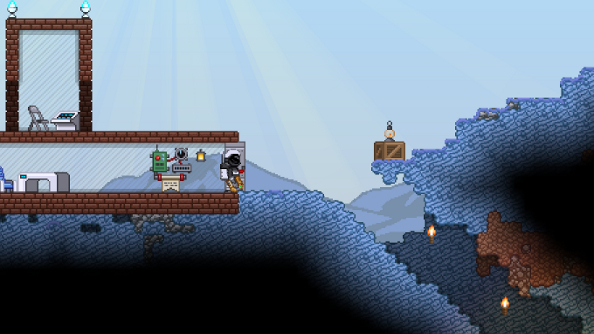 Starbound landed on Steam way back in December of 2013, capitalising on the popularity of games like Minecraft and Terraria, with which it shares a lot of DNA. It was one of the first Early Access games that we decided to review, and ultimately we recommended it thanks to the surprisingly large amount of content available even at that early stage. And also because you could play as a freewheeling medieval robot flitting through space.

The developer, Chucklefish, released the beta version of the game on Early Access, believing that it was “already pretty fun,” and wanted to ensure the community had a chance to help them shape the game.

What was the pitch? 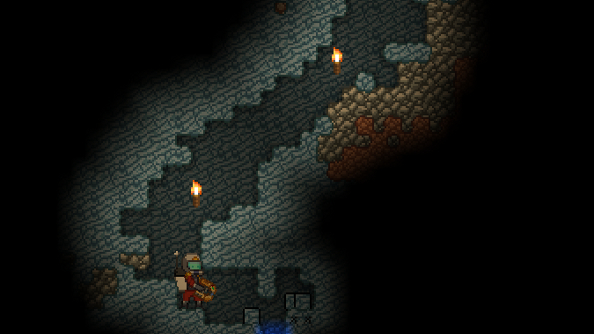 A sci-fi sandbox adventure game where players would create a custom character that could be human or one of several alien races, such as the ape-like Apex and floral Florins, which determined the style of their ship.

A whole galaxy would be there to explore, with players teleporting to worlds complete with distinct biomes and NPC settlements. There’d be Items and gear that could be crafted, worlds waiting to be mined right down to their core, and all manner of things waiting to be built, from rustic cottages to massive futuristic bases.

And of course the galaxy would be full of hostile alien lifeforms to slaughter or run away from, and all manner of weapons from giant axes to laser rifles.

What are the numbers? 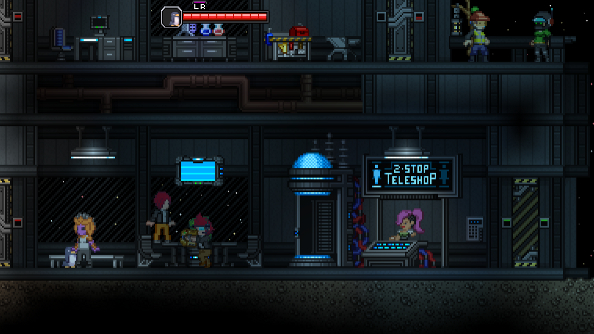 While Starbound is now in its third year of Early Access, it retains a respectable playerbase. According to SteamSpy, over two million copies of the game have been sold, and in the last fortnight it’s been played by over a hundred thousand players.

Chucklefish has been criticised for the long development time, but obviously it’s not stopped people from jumping into their starships and exploring the procedural galaxy. 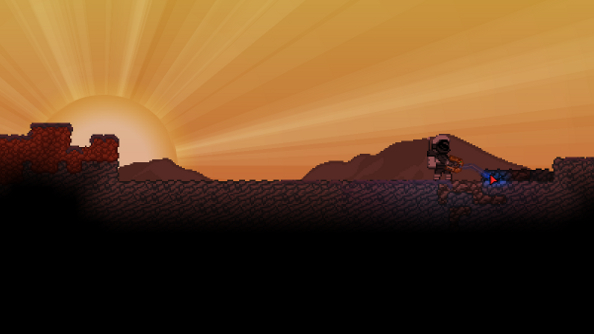 Compared to a lot of other Early Access games, Starbound launched with such a big menu of features, craftable items, colourful monsters and potential adventures that it almost felt complete, even back in 2013. You can see exactly what I made of the game way back then by reading our Starbound Early Access review.

Everything you’d expect from a sandbox was already there during beta: crafting, building, multiplayer, space travel, merchants, bosses and this gargantuan scope. But Chucklefish promised a whole lot more, from new weather conditions and biomes, space combat, spaceship customisation, pets, mods, story missions… there was a lot to look forward to.

Many of these promised features did take a long time to appear, however, and some have yet to be added to the game, even though it’s nearing the end of development.

What have the devs said? 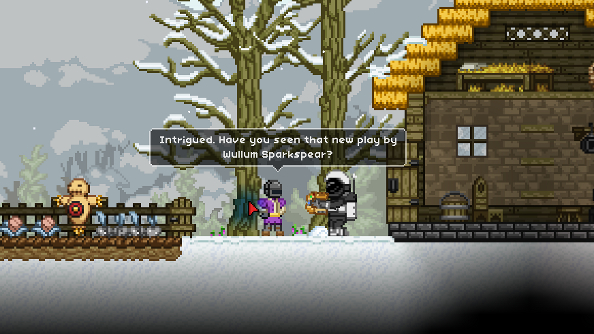 Chucklefish have faced a great deal of criticism over a perceived lack of communication with the community and the length of time it’s taken for features to be implemented. However, this narrative doesn’t really gel with reality. If anything, Chucklefish over-communicate. Hardly a day goes by without the developers updating their main blog – which is also collected in weekly updates on Steam – even if there’s isn’t really any progress to detail.

The flipside of this is that it’s been possible to track not just what the team’s been up to during any given day or week, but even what specific members of the team have been working on, whether it’s small things like a new furniture set or a big, game-changing update like last year’s combat update.

It has, admittedly, been a challenge to really see the big picture, however. Early on, Chucklefish teased a large number of upcoming features, but absent a proper roadmap, and with the developer’s hesitancy when it came to backing themselves into a corner with solid release dates for new elements, players have sometimes found themselves left in the dark beyond the day to day changes.

There have also been long periods where the game has been static. Between March 2014 and January 2015, there was only one single update to the stable version of the game. Though throughout that period Chucklefish kept updating their nightly build and the unstable version.

How much has changed? 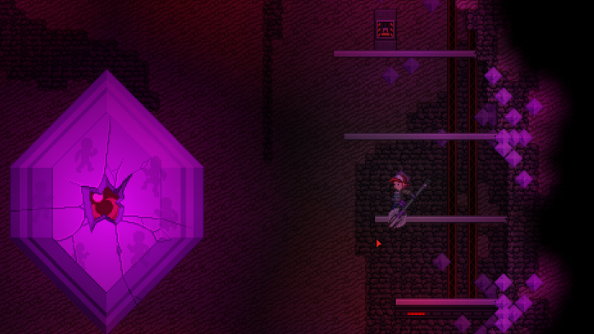 A vast amount of things have changed since launch, from updated biomes to the introduction of adorable pets that run the gamut from tamable monsters to critters that live on your spaceship. Even the flow of the game has changed dramatically.

Originally, players had to summon and fight bosses – absent much context – to unlock more of the galaxy, but a new progression system has replaced it, hinting at proper story missions that will arrive in the final beta update very soon. Now there’s an outpost to explore, with quest-giving NPCs and vendors, adding some structure to the mostly non-linear sandbox.

Some of the updates have been absolutely gargantuan, like the one that dropped in January of last year. Called Upbeat Giraffe, this patch opened up the map by removing space sectors, added a slew of new worlds – like barren planets that have no monsters and are thus perfect for big construction projects – and exotic biomes, introduced an AI interface to starships that offered missions and 3D printing facilities, the aforementioned outpost, a new race, and major changes to both mining and combat.

Now Starbound has vehicles, a proper colony system, microdungeons, challenge rooms, and countless other things that might be completely new to you if you haven’t jetted off into space for a while.

You can check out the detailed version history on the wiki to see every single change and addition.

How does it play now? 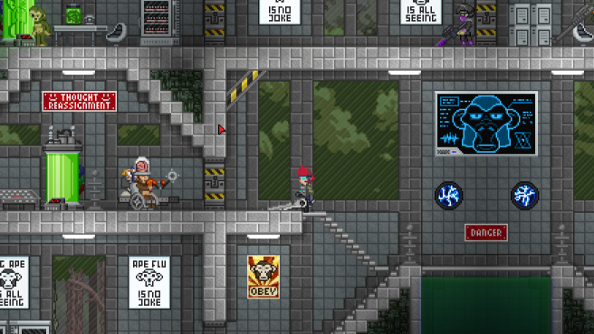 Where older versions of Starbound largely left players to their own devices, it now has structure, but perhaps too much. There are now a multitude of mostly boring fetch and kill quests which serve as barriers, blocking access to several of the game’s features – old and new – until they’re completed. Consequently, Starbound’s opening hours are now quite frustrating.

Your ship’s broken, you see. The FTL drive is all messed up, which means that, although there are not space sectors halting progress, you can’t actually leave the very limited first solar system until you fight the game’s first boss, which you can’t do until you’ve crafted a bunch of steel armour. And this boss battle, while infinitely more interesting than the original bosses, does not play to the game’s strengths, focusing on platforming and, obviously, combat.

There’s a dungeon you have to work your way through, you see, where it’s impossible to use pickaxes or your matter manipulator, and it’s not a small dungeon, either. You’ll be stuck there for a wee while. And it’s full of enemies, which would be fine, I suppose, if it wasn’t for the new combat system that makes monsters hurt you on contact instead of just through attacks.

Once that ordeal is over, however, the galaxy opens up and it starts to feel like Starbound again. There are still quests and bosses, sure, but there’s nothing forcing you to pay attention to them. Instead, there are pets to seek out, a wide array of worlds and moons – the biomes are dependent on what type of star they orbit, and define what type of ores you’ll discover under the surface – to explore and mine, and lots of lovely things to buy, like personal teleporters and vehicles.

The crafting and building systems have seen the greatest improvements. With Starbound now offering a ridiculous amount of customisation opportunities and item sets, the limit really is just your imagination. There’s more purpose in base construction now, as well, since you can turn them into colonies where NPCs can live and work inside.

Despite the rocky start, this is the best Starbound has been. Once that first boss has been dealt with, it becomes a game that you, the player, can define. Do you want to fill the galaxy with your own colonies? Spend your days getting rich from mining? Make risky raids on heavily-defended enemy compounds? And you can do it alone, or with pals via the rough around the edges multiplayer. 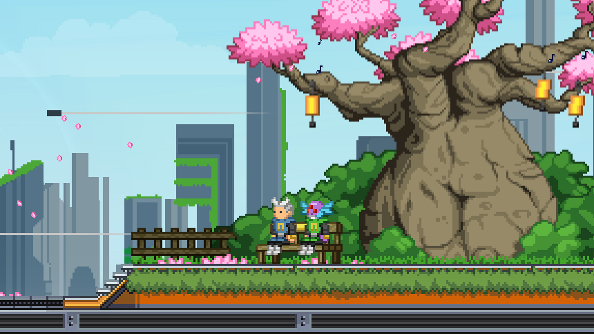 Starbound’s next update will be the big one: finally moving the game from beta to complete. Chucklefish promise plenty of future updates, but this is where it will hit 1.0. And, according to the developer, it will happen soon.

This 1.0 update is going to be huge. Story missions, procedural quests, mercenaries, ship crews (complete with custom uniforms), a crafting overhaul, a pet overhaul, a combat update, and streamlined multiplayer are just some of the things Chucklefish have planned as they bid farewell to Early Access.

I’m particularly looking forward to the rail system, which will allow me to transport my fat arse around my base without having to worry about mundane things like walking.

There’s no release date yet, but it’s “getting close”.

What other Early Access game do you want us to investigate? Leave your suggestions below.