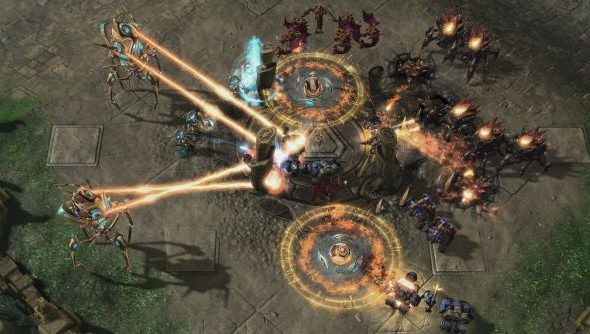 Kim recently revealed that Blizzard would solicit advice from players on the future of StarCraft 2: Legacy of the Void at the DreamHack Montreal finals. Though the early feedback the team has seen appears to be slightly more radical than they’re willing to follow through on, they will soon have a matchmaking service available for players to test the upcoming changes on.

“We’ve seen some international feedback requesting that we make drastic, sweeping changes to how the game functions,” Kim wrote in a forum announcement. “Though this isn’t representative of the feedback we’re seeing most often, we wanted to make it clear that our goal is to keep StarCraft II similar to the game it is now, while making big improvements within it.”

He and the balance team want to avoid altering the “core fun” of the RTS staple while making improvements that have been needed since the introduction of the latest expansion in the series.

“We strongly believe that the worst thing we can do to StarCraft II is make changes that turn it into a completely different type of game,” Kim said.

Most of the current feedback in the thread refers to the ubiquity of the Protoss ability Photon Overcharge in any build on the race.

He also touched on the myth of balance between races within the game, as every patch to this point has never included equal numbers of changes for the three factions.

“In Legacy of the Void’s current state, It’s super clear that not every race is in an equal state, and it’s never been the case that each of the race gets an equal number of changes in any balance update we’ve done,” Kim said.

“With this in mind, if a race already has more options in a matchup, it will not get as many ‘diversity’ buffs as the other race who only has one option. In short: the end result of these changes is what is important, not the changes themselves.”

The matchmaking service for a test region with the new changes active was not detailed further, but is currently aimed for a release “a bit less than a month from now” so that’s at least a little more solid than the classic Blizzard Soon™.