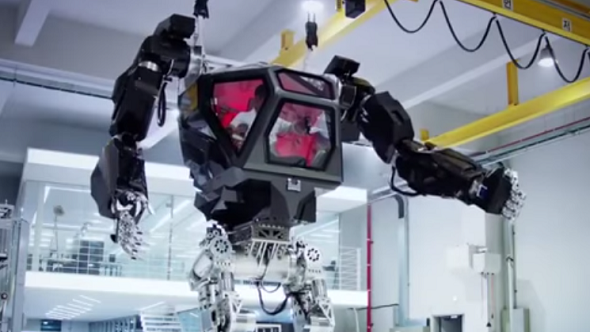 Vitaly Bulgarov, a concept artist on StarCraft, is now helping to build an actual, real life mech in collaboration with Korea Future, a tech company based in Seoul, South Korea. Check it out in the video embedded above.

Check out our list of the best space games – they might give you some idea of where to head when the robot uprising begins.

The machine is controlled by a pilot and repeats its operator’s actions like something out of an anime. The bipedal monster is four-meters tall and weighs in at 1.5 tonnes, so hopefully it doesn’t fall over like those rubbish robots from the gifs.

METHOD-1, as the machine is dubbed, is being built for industrial purposes, though it look much more suited to picking up people and tearing them in half.

“To answer one of the most common questions what is this for I’ll just say for now that from a mechanical/software/hardware/electric engineering standpoint it was quite an ambitious project that required developing and enhancing a lot of technologies along the way,” Bulgarov said on Instragram.

“That growth opens up many real world applications where everything we have been learning so far on this robot can be applied to solve real world problems. (I’m not just talking bipedal robots).”

Bulgarov has previously worked for a wide range of film studios, including Dreamworks, LucasFilm’s Industrial Light&Magic, MGM, Paramount Pictures, and Skydance Productions. He’s worked on movies like Transformers 4, Terminator Genisys and RoboCop (2014), so he clearly has experience with machines, even if they aren’t actually functional. Let’s hope this one doesn’t fall down the stairs, RoboCop-style.