Warcraft: Armies of Azeroth has been quietly plodding along on ModDB for a while, generating excitement for those that fondly remember Blizzard’s RTS-RPG hybrid. It aims to recreate Warcraft III in the StarCraft II engine, but with HD models put together from various sources, including WoW. The alpha version, featuring one map and two factions – Orcs and Humans, natch – has now been released through the SC2 Arcade, making it free for everyone, including those who don’t own the base game.

Experience the past and present of the best strategy games in our list.

Because it’s 2016, this mod even has a lovely trailer, showing all the different models they’ve managed to put in and how they move about:

If you want to play it, you can find it by searchingWAA Turtle Rock in the Arcade, as per the announcement post. They’re planning to increase the map count, but for now that’s all there is. It also isn’t fully featured, with the Tavern you may remember from the original game not able to provide the neutral heroes for gold that it used to. Obviously, those models are yet to be implemented.

If you don’t own StarCraft II, well, first off you should, but you can still get access as the Arcade is fully functional in the freeStarter Edition version of the game. Just grab the download from Bnet and you’re good to go. 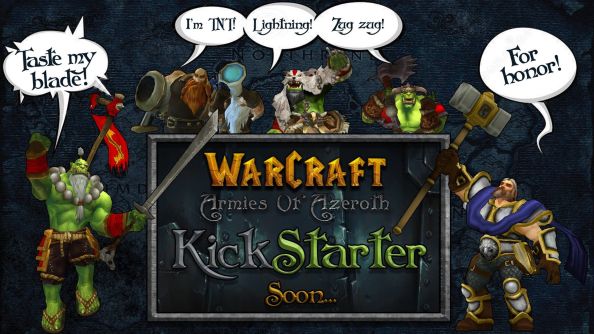 As for Armies of Azeroth, according to their Facebook the mod and team will be headed to Kickstarter this month. Presumably, that’s next in the plan now the alpha is available as a proof of concept. The exact legalities behind the process might be in debate, but given Blizzard haven’t actively stopped them yet, I assume they’re okay with it. So long as the mod is never charged for, folks being paid for their time spent creating and porting assets for it doesn’t seem dodgy to me.

I think it will do rather well too. There’s a small but loud group of people who have always wanted a Warcraft 4, and I think they’ll happily chuck five bucks towards a HD version of the last game. Personally I’d love to play a visually upgraded version of that campaign, though I wouldn’t be beyond a few balancing changes to make it a bit more fun, which don’t seem to currently be in WAA’s plan.