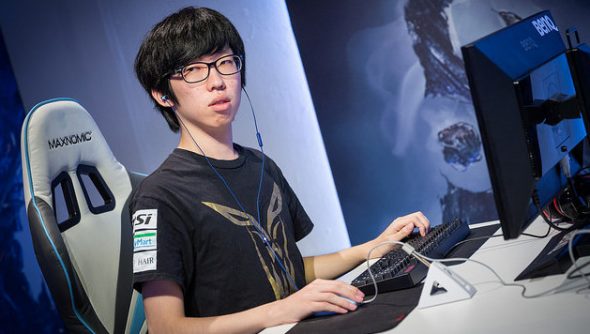 A sports betting site has thrown some serious match-fixing allegations at Korean progamer Kang “San” Cho Won in the wake of his defeat in Proleague early on Tuesday. Claiming that “the bet placement pattern clearly indicates that the match was not played on a fair basis,” Pinnacle Sports voided all bets.

It’s an ugly accusation for a Korean StarCraft community that is finally on the rebound, and an unwanted reminder of the darkest chapter in the sport’s history.

Ever since a massive match-fixing scandal disgraced Korea’s professional Brood War scene and brought down a number of the game’s biggest names, the StarCraft community has been very sensitive to any hints that games are not on the up-and-up.

So this move by eSports betting site Pinnacle Sports touches a sore spot for the StarCraft community. What’s worse is that, right now, the site has made a severe accusation on the basis of its own analysis of betting patterns, one that San has no way to disprove.

The full statement from Pinnacle says: “As the world’s leading eSports bookmaker it is therefore, especially committed to preventing corruption and match-manipulation in eSports. In accordance with this policy, the match between Dark and San {20th January 2015 } has been identified by our fraud prevention team as being manipulated. The bet placement pattern clearly indicates that the match was not played on a fair basis.”

The statement continues, “As a result all bets on this match have been voided. We apologise for the inconvenience this causes for anyone betting on this match in good faith, but hope you will appreciate that protecting the integrity of eSports is of paramount importance.”

In other words, it sounds like suspicious bets started coming in against San in favor of his Proleague opponent, Park “Dark” Ryung Woo. Dark was the favored opponent to begin with, and is widely-regarded as one of the best up-and-coming Zerg players in Korea right now.

But apparently the betting closed at 5:1, which is a pretty extreme line for a StarCraft match. It seems that Pinnacle saw some oddly large bets that swung the line away from San and set off some alarm bells.

San came back quickly with a statement of his own in which he defended his integrity and explained that medical issues, not collusion, are to blame for his performance in Proleague.

“After playing poorly in yesterday’s Proleague game, I thought, ‘I guess I’m gonna get bashed again.’ But it seems like the situation has become a lot more serious than that, and I felt that I should say something about it.

“My play was poor because I haven’t been able to practice much lately, as my wrist and shoulders haven’t been feeling good. I’ve been to the hospital for treatment but things didn’t seem to be getting any better, so I reduced my practice time.

“Regarding the betting lines shifting suddenly in Dark’s favor — I have no idea what i’m supposed to say about that. It’s extremely frustrating and it feels so unfair… If I’m under suspicion, then I’ll agree to and be cooperative with an investigation.”

It’s a bad situation, and one that may end up with an investigation. While Pinnacle has an incentive to void results if they are looking at a big payout on heavy bets, that’s kind of a nuclear option for a betting site. Nobody wants to place bets with a book that’s going to refuse to honor its obligations when the game goes against it. Furthermore, Pinnacle is much bigger than just StarCraft or eSports. So this is likely not a decision they have taken lightly.

But as San points out, this may have been completely outside his control or awareness. He’s an inconsistent player, though a very good one, and he was up against a rising talent. It’s not crazy that someone would bet heavily against him, especially if they were aware of his medical issues. Still, for someone to put that kind of money against him, they’d have had to have a very good feeling about Dark.

We’ll keep an eye on this story as it develops. Nobody in StarCraft is going to want to open this can of worms but, given the history of betting sites and match-fixing, it may not be something the community, or the Korean e-Sports Association, can ignore.