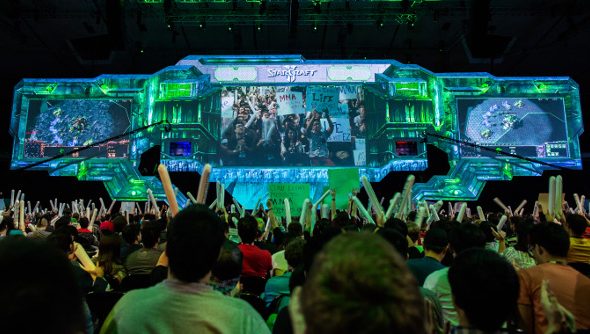 Blizzard designer David Kim is “the balance guy” for StarCraft 2. His name is at once a curse and an incantation, the Godot of StarCraft. If something is broken — and something always is — it is Kim’s fault. But Kim will fix it. Kim will make it worse.

It’s easy to parody Kim. His role is one of inherent conservatism. He’s constantly dealing with the physics of avalanches. His goal is to try and ensure that each race can beat every other race roughly 50% of the time, all other things being equal. But then he must also look at how those games are being won and lost, and ask whether StarCraft remains an entertaining and rewarding game to play and watch.

StarCraft 2 is a delicate clockwork construction, which means that some of the changes Blizzard put into place seem laughably small-minded, like the notorious build-time increase on the Terran Bunker, or the slightest tweaks to attack rates and cooldowns. If you’re not happy with the state of StarCraft, this amounts to rearranging the deck chairs on the Titanic. If you do like the balance, then these changes are arbitrary and radical.

Kim’s job is difficult because it takes place at the intersection of all StarCraft 2’s contradictions. Kim and Blizzard are still trying to build an enduring heir to Brood War. They are trying to raise the skill cap in multiplayer, yet also make StarCraft 2 more accessible to more players. They are trying to create a balanced competitive game, but also create a more exciting mix of units that results in an eminently watchable game.

For StarCraft 2, Legacy of the Void represents one last chance to get the big ideas right, before the work of maintaining game balance returns to the ship-in-a-bottle labor of patches and updates.

A Host of Troubles

No unit has ever divided StarCraft opinion like the Swarm Host. Created to give the Zerg a ranged-siege unit, the Swarm Host was one of the most novel additions to Heart of the Swarm. It is a biological artillery piece, spawning endless waves of free Locusts, which can slowly grind down an enemy’s defenses.

Depending on who you talk to it, also broke the competitive game, turned laddering into an excruciating grind, and desperately needs to be removed from StarCraft 2. By giving the Zerg access to a free, low-quality combat unit, Heart of the Swarm also incentivized near-endless attrition battles.

That has caused multiple two and three-hour standoffs, including a tragedy in five acts in the last Proleague season when Kim “Soulkey” Min Chul used Swarm Hosts to grind down a Terran player over the course of a long, dark night of StarCraft’s soul.

Kim sees all this. He knows the Swarm Host has the potential to completely tank StarCraft games. The problem, the thing he was never able to solve in Heart of the Swarm, is that the Swarm Host only occasionally produces these endless sieges.

“If it happens frequently, we could just patch it and deal with it, right?” he said on the second day of Blizzcon, while across the convention center, the StarCraft Global Finals were finishing. “But then it happens every once in a while. Like yesterday, it happened once out of all the games we played, and that one ended I think exactly at the 1 hour mark. Which is not horrible, we’ve seen much worse.”

It’s an interesting dilemma. In certain circumstances, the Swarm Host is an imbalanced unit, or “imba” in the parlance of StarCraft. But when you look across all of StarCraft, the way Kim does, it’s not creating imbalances in terms of results. It’s just that, from time to time, it kind of breaks the game’s dynamics and pacing.

“If we make a lateral move like that, to a different role, then there’s a gap that the Swarm Host was needed to fill. In this case, the ranged-siege option. So I think that’s why it’s so hard to touch. It’s not a balance problem in terms of numbers. It’s a balance issue in terms of the game is not all that fun to watch, sometimes.”

Blizzard’s solution in Legacy of the Void is to basically do away with the Swarm Host as we’ve known it. While the Swarm Host has traditionally been a fire-and-forget weapon, with players burying Swarm Hosts in key locations around the map and spawning endless waves of Locusts, the new Swarm Host requires active control.

Now, it can spawn Locusts on the move, and the Locusts themselves are even a bit stronger, but they no longer spawn automatically and the ability cooldown will be longer.

Ideally, Kim says, that should solve the problem of Swarm Hosts reaching “critical mass” and spawning so many Locusts that opposing players can no longer counter them.

“So say I wipe out a group of Locusts in the current game, where the cooldown is only twenty or twenty-five seconds. I only have a ten second window in which the Swarm Hosts are vulnerable,” Kim said. “But [in LotV] I have like a 50 second window. So now what we’re seeing internally is if you do mass Swarm Hosts, like players sometimes do these days, if you build 20 or 30 Swarm Hosts, you just can’t compete. Because your army is just not strong enough to hold [the enemy’s] push.”

There may always be philosophical tension about whether the Zerg should really have access to free units in a game that, in the last analysis, is about resource management and attrition. But whatever else it is, the Swarm Host was a daring idea in an RTS series that sometimes seems dangerously old-fashioned. It’s worth seeing whether there’s a way to preserve that uniqueness without compromising the whole game.

Don’t try this at home

Compromise is proving hard to broker between StarCraft’s high skill ceiling and the need to get more players involved with the game.

“That’s an area that we struggle a lot with,” Kim admitted. “Because we obviously want both ends of the spectrum. On the one end it the pro players, they want the game harder so they can show off their skill better. Other end is casual players, who want an easier game than what SC2 is currently.”

Legacy of the Void is trying a couple things to address that issue. Most obviously, there’s Archon Mode, an old Brood War multiplayer mode that’s been dusted-off for modern audiences.

The other thing Blizzard are trying to do with the upcoming redesign is to create units that can be used adequately by even low-skill players, but reward high-skill players with far greater efficiency and opportunity. The changes to the Swarm Host are one example of this.

“The solution that we currently have …is we can look for opportunities where the general use case, the 90% use-case, is easy to use,” Kim said, “Versus the ten percent that is so hard. So one example of that is for the Cyclone ability [Lock-on]. If it’s auto-cast, then normal people, whatever they kill is better and easier to use it that way. Whereas pros, maybe they want to save it… So maybe they can turn it off and use it in a better way.”

It’s not a perfect solution, and Kim knows that. In many ways, Blizzard are trying to find a Northwest Passage between StarCraft’s small hardcore audience and its millions of casual fans and eSports spectators.

“We don’t know what [that looks like] yet, but we want to hit that problem much harder so that the game is super accessible over here, versus super hardcore over here,” Kim said. “And what that is, we don’t really know. This is an area that we’re constantly discussing internally, and we do want to have a solution in Legacy of the Void.”

Yet even there, Blizzard contradict themselves. Even as they try to find ways to make the game a little more playable for newcomers, they’re also making other changes that will make the game even a little demanding and put players under more time-pressure.

“We’re going even more fast-paced with the resourcing change, with the worker count increase, with stuff like that,” Kim said.

These changes might make StarCraft a more action-packed game for high-level players and eSports spectators. By placing fewer resources at each base, players will have to compete more fiercely for resources in order to power-up their war machine, which could be more entertaining than the current version of the game where players can easily play off of three bases for extended periods of time.

They’re also trying to give units more active abilities, like making taking auto-cast away from the Swarm Host and stripping away the Protoss Immortal’s Hardened Shields passive ability, and replacing it with a temporary active ability.

The former set of changes put greater pressure on players’ macro-play abilities, while the latter are more demanding in terms of micro. It could be great for the spectator experience, but it also means that Legacy of the Void could make StarCraft 2 a more demanding game even as it attempts to speak to a wider audience.

A cacophony of feedback

StarCraft 2 is always going to be a source of frustration to its community. It’s a frustrating game and, of course, there are all those internal contradictions. There are players like IdrA, who never really enjoyed the new game. It was StarCraft, yes, but it was not their StarCraft. It will never be Brood War.

There are players who have embraced the new game, but get frustrated with Blizzard’s approach to balance and new unit design. There are casual StarCraft fans who, four years into the games’ life, still don’t really know exactly what this game has to offer them besides a campaign and a lot of online humiliation.

Kim is the most visible face for these dilemmas. In many ways, it’s not even about what Kim does or does not do. It’s the idea that he, more than anyone else, could “fix” StarCraft and bring it closer to the ideal version that each of its fans and players envisions.

Kim hears it all. He knows there are people who just want Brood War back, and hope that every change to StarCraft 2 will bring it closer to the series’ roots. He hears, especially from pro players, that he and Blizzard ignore the pro community and cut themselves off from one of the most knowledgeable and insightful groups of players in games.

It’s because they hear so much, Kim argues, that Blizzard have a reputation for ignoring pro players.

“We keep having to explain over and over,” he said, “but a lot of that comes not from the fact that we don’t listen, but — Say a Protoss player wants Protoss to be a little better. Zerg players want Zerg to be a little better. When they give us feedback, they think we’re not listening if we don’t implement those specific changes.”

He sighed. “Because they’re so all over the place, we can’t really listen to everyone’s feedback. What we try to do is listen to as many players as possible, and see the big picture. And then make a move that way.”