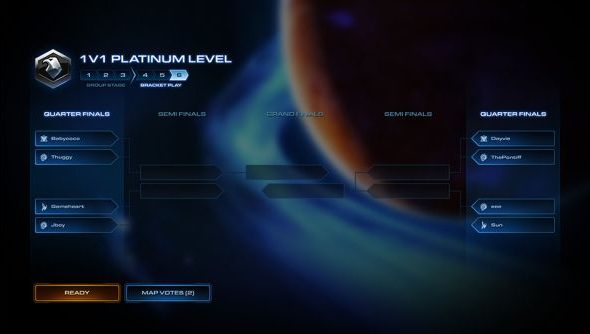 The StarCraft II: Legacy of the Void beta is getting a rather interesting and long overdue addition in the next patch. It will now be possible to play in ranked tournaments that are automatically organised by the servers. They’ll be filled with players of the same level as you, at least in theory, and will function as a bracket rather than just grinding out ladder matches all day for that sweet, sweet promotion. Two formats have been announced so far.

Here’s the details on what will be running and when:

You’ll only be able to take part in one tournament at a time, though if you scrub out in the first round you can sign up for the next immediately. They’ll run at defined points rather than just firing whenever there are 8/16 players ready to rock, though exactly how often hasn’t been announced. The wording of the announcement suggests there will be multiples running at once however, so I’d guess one lot starting per hour is Blizzard’s starting point. 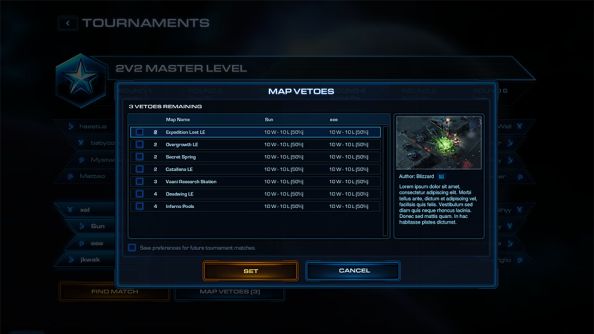 As far as special rules, the games are ran with map vetos (that let you know your opponent’s win percentage on the maps before choosing) and time limits. The time limit is around half an hour, with matches that don’t end before that point coming down to experience, a feature introduced in Heart of the Swarm that invisibly tracks how many units you kill and build, resources gathered and so on. This is a necessary evil of attempting to run a scheduled set of games, but hopefully shouldn’t impact the majority – 20-25 minutes is the average length of a StarCraft game anyway, particularly between non-pros.

There’s some more details in the announcement post. Rewards for tournaments are thus far undecided, but there’s a heavy possible cosmetic element to SC2 that’s so far gone mostly unexploited, I would expect unit and building skins to be up for grabs. It would also make sense to give ladder points, so that players that want to can use tournaments to rank up rather than them being an aside. I’d also hope for best two-out-of-three games and double elimination to eventually be made a format, as it’s naturally more fair and will encourage less cheesy strategies.

No patch date has yet been announced, but they wouldn’t be talking about this feature if it wasn’t coming soon, likely in next week’s downtime. I’m looking forward to seeing what’s done with it, but it feels like a few years too late for functionality that would have been a massive boon in the game’s early years. Of course it’s difficult to implement, and the massive teething problems of Battle.net 2.0 likely got in the way, but it is a shame that it’s taken this long to get a feature Warcraft III has had for well over a decade.