As part of the WCS Season 3 finals today in Poland, Blizzard have revealed the intro cinematic and release date for Legacy of the Void. You can see the former embedded below and the latter is confirmed for November 10th, just a few days after Blizzcon 2015 and the world finals for the game. It was also announced that a short animation, similar to the Lords of War ones that were created for Warlords of Draenor, will be released under the title of Reclamation.

I didn’t think they could outdo the Heart of the Swarm intro, particularly with my least favourite race, but god damn. The slow-mo was lovely, but everything with the Archon and the story being told are perfect. It straddles an excellent moment in the storyline and a common sight in multiplayer as warping in Protoss forces spell doom for an initially much more powerful army. Nice.

A trailer for Reclamation was also shown and it is going to be about the Protoss attempting to take back their homeworld. There wasn’t a lot to see, but I’m glad that this is expanding into StarCraft’s universe. Other companies, particularly Riot, are doing great things with out-of-game content like this. Plus Blizzard being the kings of the cinematic, anything more like this is aok with me. 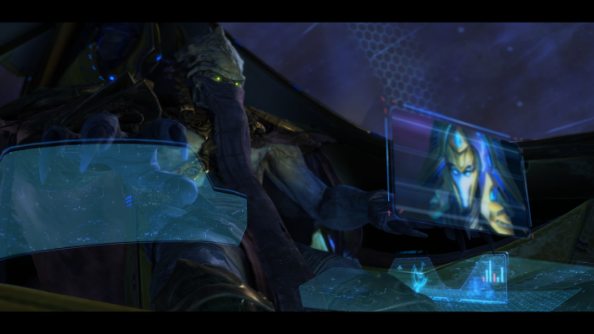 As for the release date, it’s much earlier than I would have expected. I thought they’d push about as late as they could towards that “this year” limit that was set at the last Activision Blizzard earnings call. With the balance of Legacy of the Void’s multiplayer still greatly in flux, many will be claiming that it is too early. Just yesterday, the massive macro mechanic changes that were implemented a few weeks ago are now being considered for a total reversal.

Of course, the single-player component isn’t currently worth much chilling on a few dozen hard drives at Blizzard HQ. I’m eager to play it, but I’m far more eager for StarCraft II’s last chance at revitalisation – not that what I’ve seen in the last few days indicates it needs it, but the natural viewer bump from a new expansion shouldn’t be ignored – to be as good as it can be.

In our interview, Chris Sigaty promised “many years of support” beyond the release of the final part of the trilogy, multiplayer wise. That’s good to hear, but expected – it will be the magnitude and nature of that support that is important: can SC2 become a game that reinvents itself regularly like the MOBAs, staying fresh for the decade and a half Brood War managed? Will it manage to do that without any major changes, staying firm in its ‘unbalances’ as the AWP has endured in Counter-Strike all these years?

On the campaign side, level designer Jason Huck promised it was the best and biggest of SC2’s single-player stories, with 30+ cutscenes and missions. He mentioned to me that the diplomatic basis that was hinted at a few years ago will be shaping your forces, changing how individual units operate. Meanwhile the Spear of Adun flagship will provide special powers in-mission, letting you devastate enemy forces.

We’ll have complete interviews with Chris Sigaty and Jason Huck coming in the next week, as well as a round up tonight of all the action from the Grand Finals between – spoilers – MaNa and Lilbow. Tune in on the Twitch StarCraft channel. Miss the semi-finals? We’ve got you covered there too.