In the excitement of StarCraft II’s growth as eSport, it’s easy to forget just how great the core single-player campaigns Blizzard produce can be.  Starcraft II’s core missions all come with delightful nuance: a gimmick that defines the level beyond just building a big ball of death and right-clicking towards the enemy.

Even for a piece of throwaway silliness like Whispers Of The Void, that design is still at work. In the first mission, the humans and Zerg are having a silly little war in a human base. Your job is to dodge the Zerg swarm and rescue captured Protoss. The second sees you starved of Vespene, unable to afford upgrades for your units unless you scavenge it from unstable geysers. The third, I don’t really feel like spoiling.

It’s the Protoss themselves, though, that make the gimmicks work. What these missions do, more than I think anything in the previous campaigns, is force you to make tech choices, stick with them, and understand the power of the units at your disposal. Will you combine the High Templar’s gifted to you in the final mission into Archons, or keep them separate? Archons might be easier to manage if you’re new at the game, but the High Templar’s abilities like feedback can quickly defeat more dangerous enemies. With limited Vespene, will you pick Air or Mech? (The answer is air, because Void Rays pew-pew Barney McGrew).

There’s even story! Which I sort of think I understood, but StarCraft II was ages ago and I really can’t even remember who Tassadar is, let alone why he’s a ghost. A little bit of casual racism: all Protoss look the same to me.

So if you’re into preordering PC real-time-strategy games, Whispers of the Void is a gorgeous little gift: a tasty snack before Starcraft II’s final meal. You should definitely play it. 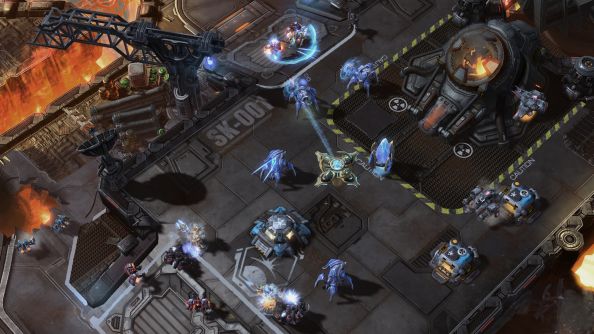 Addendum: Hey Blizzard, I know someone there is reading this. You are always watching.

We have noticed that, as a company, you are very, very good at making real-time strategy games. You’ve had some practice and you seem to know what you’re doing with them.

I think single-player RTS games are cool and sexy and the people who make them are the cleverest of all the game designers. The rest of the planet is starting to move on, and that feels like a shame. Humanity needs to be reminded just how good they are. They need a big old push.

How about a big fat movie based on your first RTS, eh? What I’m saying is this. If you don’t release a new or remastered Warcraft RTS game to coincide with the film you are missing the biggest of all the tricks. Warcraft 3’s mix of armies and heroes and RPG stats and items was way, way ahead of its time. There’s a game design there waiting to be rethought. Please don’t screw it up.