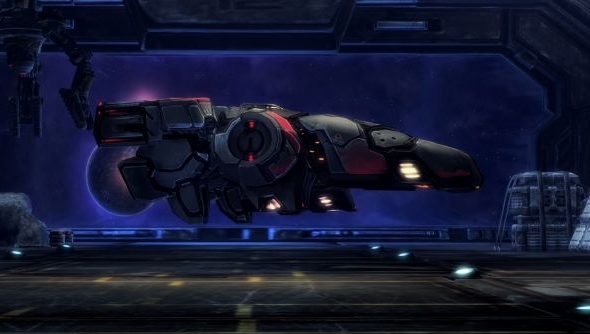 There’s a new Terran ship coming to StarCraft II named the Liberator, which sounds like it might be for breaking prisoners out of tall towers, but really is for shooting people. It deals airborne splash damage, which sounds fun in a super-soaker sort of way – but again, really about murdering.

If you’re into killing enemy units, however, you could do worse than climb the Terran tech tree to this high-cost, high-damage, hovering menace in the Legacy of the Void beta.

The Liberator’s standard attack bothers other air units, and it can’t ordinarily attack ground. But it can bombard a specific stretch of land – firing high burst, single target shots that will hit any unit entering the area. Buildings will be unaffected.

The StarCraft II dev team intend that the Terran air production building, the Starport, will wind up more rounded in the game’s upcoming third installment – thanks to a banshee movement speed upgrade, the Battlecruiser Tactical Jump ability, and the Liberator.

“By introducing this unit to the Starport and separating out the Terran mech vehicle and ship upgrades, we think it’ll allow for a more diverse set of strategies for the Terran,” said senior designer David Kim.

“It will be difficult to upgrade all three of the Barracks, Factory, and Starport tech routes, so we’re hoping to see a good variety of mixed tech units depending on the matchup and strategies players choose to go.”

Here are some Liberators in action. You’ll watch them bobbing about in clusters, seeing off aerial opponents with splash missiles, annoying ground units with an underside cannon, and harassing enemy harvesters set up on a cliffside. They’re bullies, basically.

Yesterday’s beta patch also brought a chat system rework and a bevy of bug fixes. Do you think Blizzard are succeeding in bringing “meaningful” upgrades to Legacy of the Void?