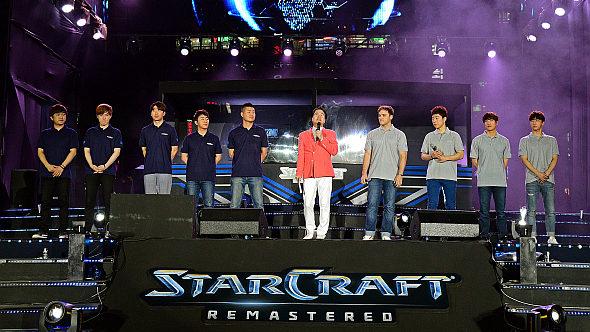 Blizzard hope to support a StarCraft: Remastered esports scene alongside that of its sequel, and will organise a competition some time this year. That’s according to Sam Braithwaite, Blizzard’s esports franchise lead on Heroes of the Storm.

StarCraft’s sequel makes our list of the best strategy games on PC, as well it should.

Speaking with PCGamesN at IEM Katowice last weekend, Braithwaite said there is a clear appetite for StarCraft: Remastered esports, and that figuring out how to support both it and StarCraft 2 from a competitive perspective will be “one of our main priorities in 2018.”

“We’re actually going to be flying out to the Korean esports office to do a big summit in April,” says Braithwaite. “We’re all going to get together and figure out how these two games play together, and what is the ecosystem where StarCraft: Remastered and StarCraft 2 both live and flourish: how do we identify each team’s core audience? What are the goals of these two programmes? And really using 2019 to kick that off, this new world of StarCraft where both these teams exist. So we’re incredibly excited about it, we have a lot of ideas and a lot of thoughts, and you can expect hearing [more] from us about how these two games will play together.”

Braithwaite was keen to emphasise that this will be in addition to, not instead of, the sequel: “It’s going to be, always, both games. We love StarCraft 2, it has a huge global base.”

Asked about timeframes, Braithwaite said “you can expect something this year. Not just an announcement – you can expect competition.”

Given these schedules, BlizzCon in November seems the ideal place to host (or perhaps conclude) a StarCraft: Remastered tournament, and to outline the details of a big esports push next year. Keep an eye out for more news after April’s summit – Braithwaite saying “not just an announcement” implies there may be an announcement, but perhaps we’re reading too much into his words.

Regardless, this implies a shake-up for StarCraft: Remastered’s current competitive scene. All such contests so far have been in the Afreeca Starleague (ASL), which has now hosted SC:R contests for two seasons, and where the original StarCraft: Brood War has been enjoying a recent renaissance.