Last Friday, while rumors swirled that IPL 6 was definitely cancelled and the LCS “super week” continued its marathon, a small audience gathered on the second floor of the Boston Convention and Exposition Center to hear the heads of Blizzard, MLG, Twitch, and the Houston Rockets basketball team talk about how eSports have grown in the last two years.

The Sloan Sports Analytics conference has its origins in the overlap between sports nerds, stats nerds, and the prevalence of both in Boston and Cambridge. It’s the sort of place that was into Moneyball before it went mainstream. It’s become big business in the last few years, and now it’s booked into the elephantine BCEC (where PAX East is held every year). Esports are kind of at the kid’s table, still, and that’s evident both from the small size of the audience and the triumphalism of the panel. If you follow eSports seriously, this year’s panel (which you can watch over on GameSpot) sometimes felt a bit like an infomercial rather than a serious discussion.

With Major League Gaming’s Sundance DiGiovanni, Blizzard President Mike Morhaime, and Twitch COO Kevin Lin all speaking on the panel, you had three people with something to promote. For DiGiovanni and Lin, the story they wanted to tell was how much eSports have grown, how big the viewership numbers are getting, and the desirable demographics that are tuning into eSports. Morhaime was there both to underline how Heart of the Swarm will increase interest in the space, and explain how Blizzard will be taking a more active role in shaping its eSports efforts going forward. On a day when a major eSports league appeared to be in imminent danger of folding, when Riot’s LCS has been dominating the eSports scene, and when there was both anxiety and anticipation about what the future holds for StarCraft 2, I couldn’t help but wonder whether eSports might also be burning in addition to exploding.

But it’s also clear why eSports need to sound this triumphant note, to make the case for their own relevance at a conference like this. Their growth has been tremendous, but also invisible to most of mainstream culture and even sports culture. When I sat down, I overheard a conversation between the Boston Globe’s tech reporter, Hiawatha Bray, and another attendee.

“I was told I should check this out,” Bray was saying. “That these are a big deal, but I don’t know about that, do you? I mean, I haven’t heard of anything happening around here, and come on, this is Boston. If videogames are going to be big anywhere, it’s with the kids we’ve got around here.”

It’s easy to miss what’s happening in eSports, and the real potential they have for becoming a major force in the next several years. That’s why I was so glad that Houston Rockets’ GM Daryl Morey was on this panel, because he speaks from a position of absolute authority about traditional sports and their business model, and yet is unabashedly convinced that eSports will one day reach the same scale and relevance.

Morey spoke from the perspective of someone who has no interest in selling eSports or a game. Esports are going to grow and succeed and that’s a given, for Morey. What fascinates him is what they will look like as they stop being a wild frontier and start turning into something more regulated and consolidated. Something a bit more like the NBA where he has made his career.

He asked questions about the lifespan of players’ careers, and what their measurable skills are. He wanted to know why teams existed, and what they meant in a sport where everything is virtual and nothing is tied to a single location. He talked about the evolution of basketball and how it surpassed hockey, and why professional boxing is a shell of its former self while UFC has become the bloodsport of the age. It was a welcome injection of perspective and history into a field that sometimes feels a bit airless for its youth and novelty. It’s one thing to talk about how eSports are the sports of the future, how fast they are growing and how much they resonate with a younger audience, but it was often Morey, with his experience in professional athletics, who seemed to have a better sense of how that future might take shape.

One aspect of the future seems particularly to concern Blizzard: the need for StarCraft 2 to have its own unified championship. While Morhaime and Blizzard are quick to duck discussion of League of Legends and Riot’s LCS, a “single world champion” was a theme that Morhaime returned to several times as something that StarCraft eSports should have.

Morey and DiGiovanni seemed less convinced, with DiGiovanni pointing out that several sports never have a clear championship to decide which player or team is the best. “Who is the best? WHo is best on particular day in football? Who is the best on clay vs. grass [in tennis]?” he poitned out. “What we have to do is standardize this as much as possible. But even in traditional sports, Yankee Stadium has different dimensions than Fenway.” 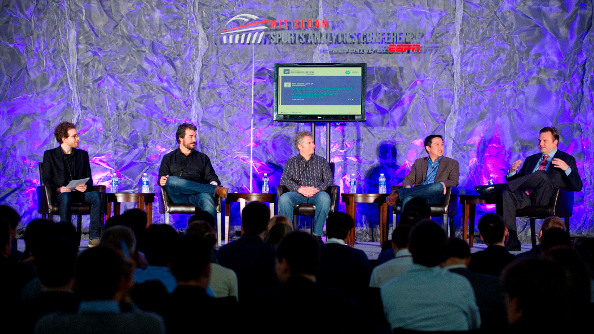 Morey pointed out that championships themselves are usually inherently contrived. “It doesn’t really matter who the best is. You just need an achievement everyyboddy really cares about,” he said. “It’s not the best team that wins. That year when Dallas [the Mavericks] beat Miami [the Heat]? Yeah, Dallas was better for that 7 game series. But what really matters is they’re the champion, they’re etched on the trophy. That’s what matters. It has to be hard to achieve.”

Nevertheless, Morhaime referred several times to plans to rationalize competitive StarCraft 2 this year, and DiGiovanni also made mention of the fact that MLG will be playing some role in Blizzard’s plan for further organizing the sport. While nobody was ready to discuss those plans openly, it seems likely that pro StarCraft will start taking a new shape in the next few months as Blizzard’s plans become clear.

Talking to DiGiovanni privately after the panel, he talked about changes he wants to see in MLG for the rest of the year. With IPL’s future uncertain and quite possibly nonexistent, and with MLG on track to turn a profit this year, MLG is in position to be the predominant North American eSports organization. But one thing that’s been lacking, DiGiovanni admits, is the kind of accessible, relevant, and regular content that defines the LCS.

“[Our goals are] stablization of the scene. Having a fixed schedule, having a sense of progression and tiering,” DiGiovanni said. “We want to work with Blizzard and make usre we have the ability to create something that’s truly global with them. And have it culminating in something that means a lot. More focus on the infrastructure. More focus on the entry points to new fans and new players, and broadcasting that and attracing new audience to it. More of what we’ve been doing, but at a bigger scale, and better integration with the game and with the publishers.”

DiGiovanni admits that MLG’s efforts in that direction have been a bit lackluster in the past, with their regular broadcast content largely consisting of short, low-stakes tournaments and showmatches. “When you have the one-offs it doesn’t work,” he said. “So the seasonal structure and letting there be continuity from event to event is something we need to work on. And this year we have some things that will solve that incredibly well for most of our games.”

Here again, DiGiovanni started hinting about what changes will be coming to the league and StarCraft 2 across the year. He mentioned that Riot have shown the importance of having strong local regions, so you don’t have to have people traveling constantly for live events, and for regional competition to mean something.

“That’s what I mean, we need an infrastructure, something put in place to address that,” he said. “Something that allows scalability, where being top eight in America means something. And top eight in Europe, top eight in Asia. Allowing these areas to intersect but also operate independently. And the great thing about StarCraft is that, because it’s a single player game and the format that we use, there’s not a lot of attachment and overhead that you get with team-based games.”