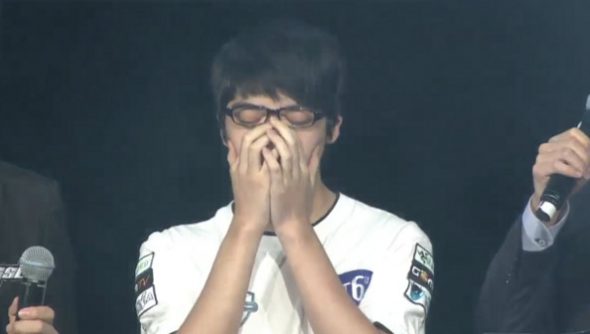 There is no overstating the energy and excitement at a GSL Code S Final. This is where the StarCraft 2 faithful gather to see StarCraft’s most prestigious title awarded, a career milestone roughly equivalent to the Super Bowl or a Formula 1 world championship. Whatever else happens in a player’s career, this elevates them into a select group of champions, who have overcome the best the sport has to offer.

It was especially sweet for an American audience that has long-waited for this moment. American GSL fan usually follow their favorites from the other side of the world, watching VODs or watching live until sunrise. StarCraft may be Korea’s national sport, but the love of its American fans runs deep. When Ko “HyuN” Seok Hyun and Kwon “Sniper” Tae Hoon were introduced before their match, they walked down the aisles through the crowd, washed in the glare of spotlights as audience members stretched their arms out to high-five them, clap them on the back, and let them know how thrilled this Las Vegas crowd was to finally see StarCraft’s top competition come back to America.

While the atmosphere and excitement promised something special, the match began with an anticlimax. Game 1 was over in just minutes as HyuN rushed Sniper with a Zergling / Baneling rush that caught Sniper exposed with only drones available for defense. While he tried to micro his way out of trouble, there was simply no surviving as fresh Zerglings and Banelings arrived from Hyun.

However, Sniper answered back with a clean Game 2 victory on Bel’Shir Valley as he took apart an early Roach rush from HyuN with a smaller force of Roaches backed, crucially, by Infestors. HyuN doomed himself by pressing his failing attack with his remaining Roaches. Sniper was able to steamroll forward only minutes later with his large Infestor force and his untouched Roaches. HyuN was left too far behind by his earlier attack and had to GG as Sniper’s army overran his double-hive expansion.

Their third game on Abyssal City saw some daring early aggression from HyuN that Sniper narrowly managed to fend off with some smart micro and good defense against HyuN’s banelings. Then he began a push of his own, sending Roaches and some Banelings across the map to pressure HyuN. The whole match likely hinged on this engagement, as HyuN’s line absorbed a few nasty hits from Sniper’s Banelings. That reduced his health enough to let Sniper’s Roaches quickly cut their numbers and push deeper into the base, inflicting heavy damage on HyuN’s army and economy before being pushed out.

While game stabilized for a few minutes after that, HyuN was left crucially behind as Sniper moved into the Roach / Infestor phase of his game nursing an economic and military lead. HyuN was able to muster a last-ditch defense, but the sheer weight of Sniper’s attacking force quickly bent his line backward and broke it. It left HyuN in a bad place, not just behind on games, but with his sole victory coming from a cheesy opening he would be unlikely to repeat successfully. HyuN came into Game 4 on Entombed Valley looking increasingly desperate and overmatched, and he opened more cautiously while Sniper stormed across the map with an early Roach timing attack. HyuN was ready with Roaches, Zerglings, and Banelings of his own, and Sniper had to try and make an escape back across the map. His lack of Zerglings proved fatal, however, as HyuN’s Zerglings cut off his retreat just long enough for his two Banelings to detonate and decimate Sniper’s force. Now momentum was firmly on HyuN’s side as his superior Roach army poured into Sniper’s base. Sniper simply didn’t have enough defenders to hold (his investment in early Infestors came back to haunt him here), and they were spawning too far apart to engage as a group, and he was forced to GG as HyuN’s Roaches peeled away all his defenses.

With the series even at two apiece, the finalists headed to Whirlwind, a GSL map that is in some ways designed for Zerg. The center is wide open while all the expansions are clustered in a circle around the edge of the map. The combatants puts the extra space to good use, sending multiple waves of Roaches against each other as they slowly teched up into Infestor / Roach compositions. Sniper foiled a massive attack from HyuN with a colossal concave whose outer edges spilled off the screen. This time, however, HyuN fell back without letting his army be destroyed, then moved into Hydralisks to break the stalemate. It worked beautifully in the next engagement. Once again Sniper defended with an extended line curling around HyuN’s southern flank, but HyuN’s Hydralisks were inflicting heavy casualties on the northern end. Sniper’s line folded and broke, and he GG’d as HyuN’s intact army pursued his undefended Infestors.

Sniper’s back was against the wall heading into Game 6 on Daybreak. HyuN looked to close things out the same way he’d won the last game, going for a Hydra / Roach / Infestor combination. He pushed out too early, though, and his Roaches got ahead enough that they walked into Sniper’s Roach / Infestor army. Sniper quickly got a fungal on a small but crucial group of Roaches, then pushed in against HyuN’s retreating army. HyuN dearly regretted those Roaches as Sniper’s Roach Infestor comp had just enough firepower to break through into his base. HyuN held for mere moments before follow-up attacks finished him off and brought things to Game 7, on Cloud Kingdom. After an abortive start followed by a quick regame, the two closed out the GSL’s 2012 in style with a see-sawing battle across the map that had the crowd screaming itself hoarse. Both players took turns gaining an advantage, only to lose them again moments later as they pushed their luck just a bit too far. HyuN’s best chance for victory probably slipped away after an otherwise decisive engagement in which he picked off almost all of Sniper’s Infestors as they tried to retreat from a failed attack. HyuN’s Hydralisks, who had given him the victory in the previous battle, were the first ones up the ramp into Sniper’s expansion and fed themselves straight into Sniper’s Roach line. They died instantly while HyuN’s roaches followed up the ramp, but with the Hydralisks gone he didn’t have a chance of breaking Sniper’s base.

Sniper slowly built an economic lead, using a rebuilt fourth base at the southeast corner that HyuN never scouted until it was too late. He nearly lost the game again when he lost another major engagement, but was saved by a critical hesitation from HyuN, which Sniper exacerbated by using some long-burrowed Infestors to pop Infested Marines into a couple of HyuN’s active mineral lines. HyuN went on the defensive just long enough for Sniper to even the population numbers.

HyuN eventually realized he’d missed one of Sniper’s expansions. His last-minute push to kill it was cut-off by Sniper, and HyuN tried to circle back to the ramp, only to run into an encirclement. The ensuing battle was swift and decisive, destroying HyuN’s army with no hope of rebuilding and forcing a GG.

It was a magnificent final, capped off by an awards ceremony in which the GOMTV hosts promised a return to the United States followed by chants of, “Viiiiiivaaaaa Las Veeeegaaas!” as the crowd went berserk. Then, according to GSL custom, Sniper planted a long, lingering, and possibly indecent kiss on the trophy, at the end of which I suspect they were married.

As Vegas weddings go, it was one of the best.