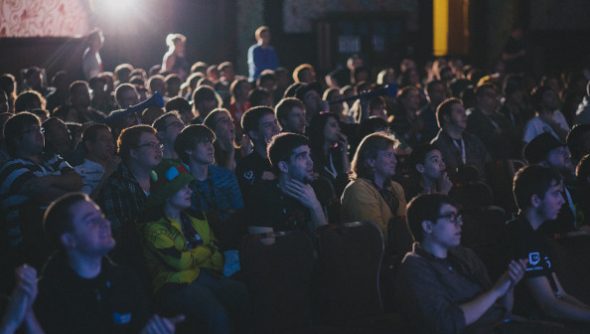 No matter how good the tournament, I always find the first day and the early rounds a bit sad. In no time at all, the competition field, with all its potential for amazing matchup and great stories, is whittled down to a handful of contenders as possibilities give way to results. Plenty of great stories come out of it, but there are inevitable disappointments as fan favorites fall short with the spotlight on them, and underdogs don’t rise to the occasion. Then they’re gone, watching the tournament from the sidelines or vanishing altogether.

Today was elimination day at IPL 5, and for the most of the entrants still in play, the championship is now a tantalizingly close possibility. All they’ve got to do is beat the best players their sports have to offer.

StarCraft 2 followed a familiar pattern as a handful of non-Korean players made surprisingly strong runs for the final bracket, only to get picked off by their Korean rivals. The biggest surprises of the tournament were Scarlett, HuK, and Snute, each of whom played some of their best StarCraft and claimed a number of apparent upsets.

Sasha “Scarlett” Hostyn easily swept past NaNiwa and Axiom’s Ryung (a GSL semi-finalist!) before getting sent to the loser’s bracket by Sleep, where she had the misfortune to run into DongRaeGu. Their ZvZ battle was an interesting one, showcasing both players’ incredible micro and Scarlett’s at-times-uncanny ability to get inside her opponent’s head. She won their second game in the air with a perfectly timed Mutalisk assault that exploited her superior upgrades at the exact moment DRG was most vulnerable. But the other two games ended in early defeats, as DRG was able to overwhelm her with zerglings and banelings that kept her busy with micro while he cranked up his economy to brute-force her out of the game. It illustrated just how many weapons DRG has at his disposal, as he can fight intense tactical battles while still making sure he’s staying ahead on game strategy.

Chris “HuK” Loranger had a great run through the Loser’s bracket, knocking Ryung out of the tournament following his defeat at Scarlett’s hands. Then he eviscerated YoDa 2-0 before getting picked off by Sniper. There was no shame in that, however, given what sniper would do in the GSL Code S semifinal later in the evening.

Jens “Snute” Aasgaard soundly beat last season’s GSL winner Life with superior aggression, taking a 2-1 victory after a dominant Game 3 performance, but fell to Bomber the next round, the last “foreigner” knocked out of the event.

Departing with the foreigners are a number of the sports bigger personalities: MC was another of Sniper’s victims, along with TaeJa. Stephano went out against Hyun, and DRG eliminated VortiX. Those who remain are all excellent players, of course, but with the exception of DRG and Leenock, they can also a be a bit anonymous.

Although Kwon “Sniper” Tae Hoon has the potential to emerge as a major star after this tournament, where he has not only torn through the IPL 5 bracket but also made it through to a GSL Code S final following a 3-2 victory over Ryung. Without a long track record in the sport, Sniper seems to be slaughtering everybody unlucky enough to come up against him. If he beats HerO, he’ll advance to the finals bracket and increase his chances of a double championship and a truly staggering payday.

The GSL tournament, by the way, was undoubtedly the highlight of the day’s StarCraft competition. While the crowd gathered around the main stage could be sparse at times for the IPL matches, it was packed for the GSL Code S semifinals, despite HyuN’s handy victory over INnoVation The crowd was eventually rewarded by Ryung’s almost-comeback against Sniper, who won the first two games before Ryung rallied and evened the series. Unfortunately, he ran out of steam in Game 5 and Sniper beat him handily. League of Legends was host to some of the day’s best drama and biggest crowds. The shock of the night had to be Fnatic’s match against Taipei Assassins, who looked unchallengeable coming into this tournament.

But Fnatic didn’t just beat them, they absolutely dominated them in Game 2. Fnatic, who wouldn’t even be at IPL 5 except that one entrant had to withdraw, came in on the heels of their DreamHack victory and sent a wrecking ball through TPA. Or more accurately, they sent a Rekkles.

Martin “Rekkles” Larsson is not a regular member of the Fnatic team, but a 16-year old AD alternate who is not even old enough to join the team full time. Still, if his performance today was anything to judge by, it might be time for Fnatic to buy him a fake ID and look the other way. He racked up 12 kills as Vayne, out of 19 kills total for his team, and five assists. Admittedly, his team were setting him up to get some of those kills, but still: he was turning every team fight decisively against TPA, who were unable to make any of their gameplans works as they got massacred in one fight after another.

The atmosphere was electric in the two game series, as the crowd went from disbelief to growing elation as the upset of the tournament played out before them. Fnatic even managed to overcome a small lead by TPA in their second game before breaking the game wide open in their favor, to gales of cheers from the crowd.

The crowd got another show later in the evening when Team SoloMid fought to stave off elimination at the hands of a struggling Azubu Blaze team in the loser’s bracket. TSM have looked poor of late, but against Blaze, they briefly seemed like they were unstoppable. While Blaze consistently enjoyed a gold and item lead, TSM stayed in both their games by picking Blaze apart in teamfight after teamfight and pulling off perfect ganks.

While items eventually gave Blaze the firepower to overcome TSM, it seemed like progress for the American team, who have been abysmal in fights for the last couple months. If TSM can keep improving their fighting tactics while keeping their gold farming where it needs to be, they’ll be in competitive shape for Season 3.

In League of Legends, Curse NA will take on their newly-acquired sister team from Europe, and the Taipei Assassins will fight to stay in the tournament against the Singapore Sentinals. Three hours later, World Elite and CLG EU will have their rematch, after CLG eliminated WE from the Season 2 playoffs in an endless, playoff-breaking quarterfinal that changed the meaning of ward kills forever.

Finally, the Shootmania tournament also begins tomorrow, where a number of veteran competitive FPS players will show us whether Shootmania has what it takes to reinvigorate the flagging pro FPS scene.