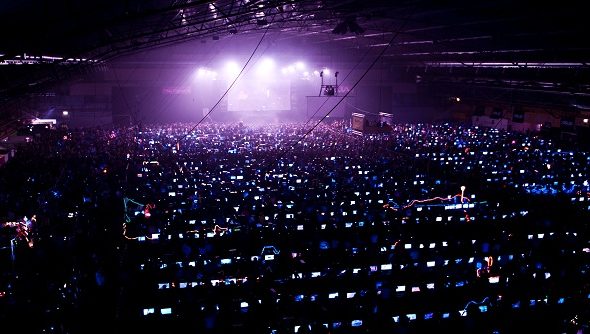 Dreamhack received over 4 million unique views on their livestreams of the four days of the LAN festival, according to the organisers; an extraordinary amount.

Dreamhack, held at the Elmia exhibition center in Sweden , accommodated a whopping 15,531 visitors across four days; a significant 19% increase on the summer event in 2011.

“Our conversion from the World’s largest LAN to become a real digital festival was more definitive than ever.” explains Dreamhack CEO, Robert Ohlen. “More music, eSports and entertainment on stages, but the clearest message was definitely that LAN is not going away and that the LAN is still the core of Dreamhack.”

According to the ‘Tech crew’ there were also 12,446 unique devices connected to their network – that’s a lot of PCs in one place.

The recorded livestreams, that included coverage of the Starcraft II and DOTA 2 tournaments, generated a staggering 807 hours of content, which if you were to watch non stop and without sleep, would take you 4.8 weeks!

The exact unique viewing figure stated is 4,068,303 with total views of 12,522,319. The LAN had 1.5 million uniques last year, meaning that the viewership has almost tripled.

Based on results like these, the size of Dreamhack Summer 2013 is anyone’s guess.