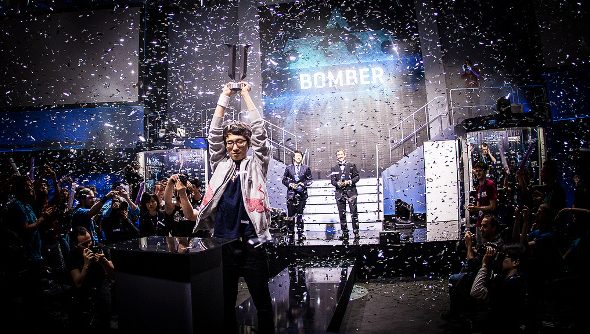 In a pair of ambiguous announcements, Choi “Bomber” Ji Sung announced that he was departing the StarTale StarCraft 2 team while SK Gaming revealed that they were parting ways with their sole StarCraft 2 star, Jang “MC” Min Chul. Neither player’s plans are entirely clear yet, and it’s just the kind of news that will have people guessing about their own intentions and the overall health of StarCraft 2 eSports.

Bomber revealed via Twitter that he was leaving his team, and said that he was looking a new organization. He then suggested people DM him or shoot him an email, which is perhaps the most eSports way of doing a deal short of starting a TeamLiquid thread.

He did an interview with RedBull eSports, explaining some of his thinking. He also hinted that he was thinking about starting his own team, though it’s very difficult to know how seriously to take that. As for why he left StarTale, he said, “This was really tough choice but I only have one to two years left before I join the military so I want to focus more on traveling and competing in tournaments outside of Korea.”

You could read this as a pre-retirement tour from Bomber, going abroad to collect all the foreign prize money he can before military service effectively ends his career (very few players have ever come back to progaming following military service). He’s also moving over the WCS America for the 2014 season, which will certainly be easier than competing in the Korean GSL.

For MC, then situation is even muddier. SK Gaming announced that MC was leaving the team as part of a year-end news roundup. In politics, I believe this is known as a news dump. “Oh, by the way, about our living-legend StarCraft player…”

The statement from SK simply said, “It is time for both, SK and MC, to move on and see what the future holds. The last couple of years have been great fun not only for you guys out there, but also for us, working with this very special personality.”

However, SK’s involvement in StarCraft never went beyond signing MC, and with the team’s increasing focus on League and other games, it’s possible that the cost of keeping a high-profile player like MC around no longer made sense.

For his part, MC seems to be doing just fine.

It’s hard to know what these moves mean. Bomber and MC are certainly two big names, and their departure from their teams might signal that, for star players, pursuing personal sponsorships and working independently might make more sense than playing with a team. Bomber, particularly, may have felt that the rigor of a team house and team league competition no longer fit with his own goals for the end of his competitive career.

{"schema":{"page":{"content":{"headline":"Shakeups in StarCraft as star players Bomber and MC leave their respective teams","type":"news"},"user":{"loginstatus":false}}}}