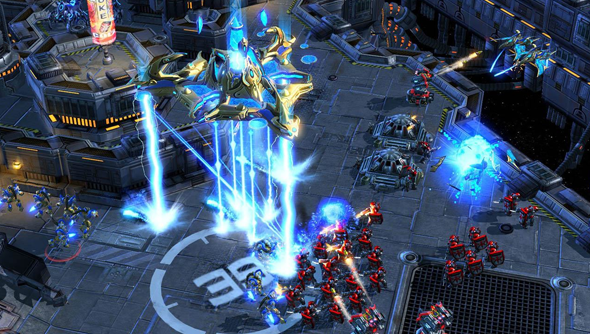 Starcrafters, head on over to the Public Test Realms now to embrace a host of new features just sitting there waiting for you to enjoy them. Before you do go, let us be your guide to what those shiny new features are. There’s something for everyone, from excellent new support for extension mods to AFK host kicking, right through to the original rock-a-thon soundtrack making a comeback.

Patch 2.1 introduces some changes for extension mods, and it will come as absolute relief to both modders and mod users. If you’re a content creator, you need never recreate the parameters of your mods for every new map you test. Just create your mod, publish them to Battle.net and players can just apply them to any map in the Custom Games list. If you’re a content user, for you that means you no longer have to hunt around Custom Games menus trying to find out what maps have been published with a specific mod attached. Now you can simply choose a map, hit “Create with Extension Mod” and then select a mod from a drop down menu.

Also receiving a dose of pain relief is clan and group events, which can now be scheduled on a calendar. If you’re planning practice for next Wednesday night, add it to the calendar and all your clan members will be notified. You can set up an event by clicking the “Create Event” button in the Clan or Group window. It’s like Facebook, just with more zerg domination.

If you’ve been stuck in a lobby before, you’ve likely suffered the pain of an AFK host. All you want to do is obliterate some enemies with your newly developed strategy, but the host of your game has wandered off to make a sandwich or look at cat videos. Patch 2.1 removes them entirely; if a player is seen to be inactive for a period, the game will prompt them to respond. If no response is received quickly, the game will boot them from the lobby, allowing players that are good to go get on with blowing each other up.

Finally, if you’ve been with Starcraft since it’s inception, you will be no doubt familiar with this blisteringly good bit of music. You were probably a little upset that a modern remix did not appear as part of Starcraft 2, but now that upset is a thing of the past. In the options menu there is now a feature in the Sound tab to play the original Starcraft/Brood War soundtrack, either on its own or mixed in with the more modern Starcraft 2 melodies.

The Patch 2.1 updates are only available through the Public Test Realm servers at current. If you’re unsure how to access those, check out the notes on the Starcraft 2 blog and scroll to the bottom.