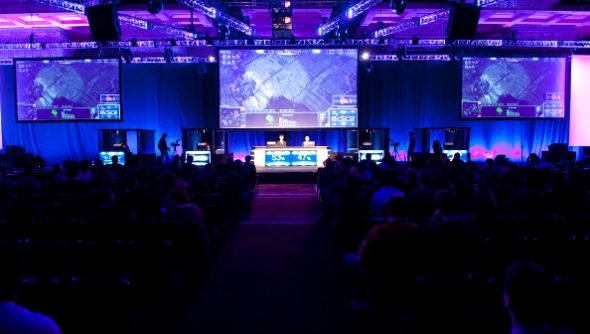 Getting off the flight to Las Vegas from Boston, the man in my row starts talking to an older woman. They are both regulars in Vegas, and they reminisced about hotels and casinos while the rows ahead slowly emptied. There’s one they both liked but (and here the woman sighs wistfully), “It’s moved farther down The Strip since the old days. I haven’t been back in years.”

In a cab heading to IGN Pro League’s IPL 5 at the Cosmopolitan, I see a huge billboard bearing the name of a hotel that proclaims, in huge letters, “The center of the action has shifted.” Perhaps it has, and that old hotel and casino has fallen even further down The Strip, rendered obsolete by newer places and crowds that area always chasing the action, and the energy that gathers around it.

Esports aren’t all that different. This is a community where people weigh and assess “the hype” like it’s a fine wine, and exhort each other to “get hype” unironically. Esports are chasing bigger audience and more mainstream attention but, really, what they’re chasing is the action. Bigger crowds and personalities, more money, louder cheers, and above all, more excitement. IPL 5 has moved to the Cosmopolitan, and next year there are probably going to be four of these events instead of just two. The center of the action is shifting. Or at least, that’s what IPL and its General Manager David Ting hopes.

When we meet in a suite at the Cosmopolitan, Ting has just received word that their traffic has just blown past the peak of IGN’s traffic during E3 week. And the tournament has barely begun: this was just viewership for the Thursday morning matches. The big games won’t be played until later in the weekend.

“Our engagement level is double that of E3,” Ting explains. “We’re smart people, and we’re all gamers, and those are statistics that will sway us to invest more in things that gamers wants. Because the gamer taste has shifted. People [want to] have a laid-back experience and watch people play and watch pros play, and mix it in with some of their own play. That mixed behavior is what will help the scene grow, and it’s complementary to the traditional scene, where people want to find new games they want to play.”

That’s the attitude that won over fighting game titan Capcom, who have just signed an exclusivity agreement with the IGN Pro League for 2013. Ting explains that Capcom were looking for a way to combine their traditional approach to marketing with the exposure and prestige that surrounds a strong eSports scene.

“Capcom wants exposure so that they get their game out there,” Ting explains. “People forget that IGN.com is actually the biggeste game media site, so it’s a great extension of the same process Capcom needs to do to prmote their game sales. That’s one of the reasons they slected us, because of that whole history of us working together. So that trust relationship, especially with a Japanese company, is extremely important.”

But even more important was the scale of IPL’s and Capcom’s shared ambitions for the Fighting Game Community. Ting says that, in time, Capcom have hopes that fighting game tournaments will rival or overtake sports like boxing, but they were afraid that their previous eSports strategy wouldn’t get them there. “We were able to convince them with our vision that we would do things differently,” Ting says. “If you look at other tournaments they run in a convention center, they run in a way [that Capcom] doesn’t like where that is leading. They want it to be in the spotlight in Las Vegas, produced just like boxing. So if you look at how we do our production, the way we setup the sound, the lighting, the stage, the preproduction… we go to a lot of extensive care. We show them that, and say that this is something that we’ve done in 18 months. Imagine where we can go in a year.”

So next year IPL will be the only place to find pro Street Fighter IV and Street Fighter X Tekken play, although Ting stresses that IPL will be working with smaller tournaments to make sure the scene stays strong and vibrant. They will run worldwide qualifiers to identify the best players and bring them to future IPLs for what he hopes will be the biggest spectacles the community has ever seen.

“Because as I see it, the FGC has been saturated. It has peaked. Other eSports are beating it and growing faster,” Ting says. “Capcom recognizes that, and want somebody who recognizes teh community and adores the community, but at the same time somebody who will take it to the next level.”

Under the big top

That next level isn’t just about who wins or loses, or how many people attend, Ting thinks. They’re about giving fans more value and a better experience than anything else around.

To that end, though, Ting and IPL always want to showcase the best. Even if it means some community and regional favorites end up missing the boat. “We don’t want to skew the tournament by geographics or handicapping because you’re in Europe or the US. We want to celebrate gaming by bringing out the best. This is our philosophy because we don’t follow traditional sports. We want to keep it open and free.”

Ting feels this is important to eSports’ and IPL’s mission. “Anybody who has a dream can come in and compete and get a free ride here. So we take away the economic disadvantage. And that’s what eSports is about. Making gamers, people with talent and work ethics to make it a profession. To make that dream come true.”

Ting doesn’t just mean the dreams of elite StarCraft, League of Legends, and Street Fighter players. His vision is for something broader and more inclusive, something that better represents the different ways to gamers enjoy and relate to their hobby. “I don’t want to do the traditional,” Ting admits. “I think some of my future choices, people will say, this is not an eSport. So I believe that gaming is created to be fun. And we want the watching experience to be fun. …It’s videogame competition for fun. We want to find games that people really want to play. There’s a broad range of more skilled and less skilled stuff.

“And I’m going to focus more on the less-skilled stuff. Because I want to focus more on accessibility. People being able to get in is extremely important. So by offering that range, it allows more people to watch and enjoy. So there’s a graduation of games they can aspire to get into.”

I point out that StarCraft 2 pro Destiny made a similar argument on behalf of the importance of casual play, but Ting’s goes even further.

“When you look at the whole ecosystem, you should also see that there’s a high school student who doesn’t have a summer job,” he says. “He spends the whole summer getting really good at Angry Birds until he’s the best at it. Why shouldn’t he have the same chance as Destiny? So I want as many gamers to make a living gaming through IGN as possible. Because I’m a gamer, I suck at it, and that’s why I do other things that are more mundane. It’s not as exciting as being on the main stage. I want to make that available for more gamers.”

Still, the more traditional eSports games are certainly not forgotten. This weekend, IPL’s partnership with the GSL has brought the GSL production team to give IPL 5’s StarCraft tournament the same fantastic presentation that defines the GSL. The League of Legends tournament rivals the Season 2 Playoffs for star power. Ting describes IPL as being a “celebration of the best, with the best” and that’s certainly what’s on offer this weekend.

Ting and IPL are trying to shift the center of the action to their league, becoming not just one of many LoL and StarCraft tournament managers, but a destination event for all of eSports and the people who love them. With their promotion of Ubisoft’s Shootmania, and Capcom exclusivity for 2013, plus a deepening relationship with GSL and Riot, IPL are looking to stay at the center of The Strip.