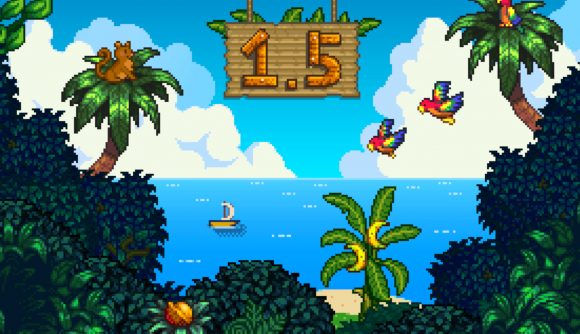 Stardew Valley 1.5 is finally out on PC after a lengthy stretch of development, and there are a whole lot of unexpected additions on top of previously-revealed features like banana trees, beach farms, and split-screen co-op. The update also introduces a whole region for endgame players, which will let you finally travel to those mysterious Fern Islands.

“1.5 adds a big piece of new content to the ‘endgame’ of Stardew Valley,” creator Eric ‘ConcernedApe’ Barone explains. “Now, completing the Community Center is just the beginning. It’s not all about end-game content, though… there’s plenty of new stuff all throughout the game, as well as useful improvements and convenience features.”

That’s the cautiously spoiler-free description, but the full changelog offers a load of details – spoilers to follow, obviously. You’ll be able to travel to Ginger Island now, which will let you dig into a new storyline featuring a load of new NPCs. You can unlock a new farm on the island where you can plant any crops year-round, and the island features a new volcano dungeon with a host of new enemies.

There’s far too much to list all the new stuff here, but you can look forward to changing your name and gender midgame, catching some new fish, and sitting on chairs.

Bird's eye view of the new Beach Farm. Also a reminder to check out the new "Advanced Game Options" button on the character creation menu if you're starting a new game! pic.twitter.com/NYf374Iq7L